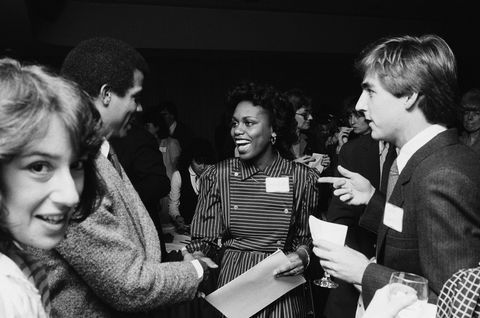 It's been 25 years since Anita Hill testified in front of the Senate Judiciary Committee about allegedly being sexual harassed by then-Supreme Court nominee Clarence Thomas, and yet the Brandeis University professor is still haunted by one question: "What if?"

At the Simmons Leadership Conference in Boston on Tuesday, Hill implored the crowd with that same question. "What if the Senate had taken me seriously?" she implored. "What if the Senate was able and willing to acknowledge the experience of women? That our knowledge and our experiences were valid and important to the major decisions that they were making? What if they had just acted as leaders and not simply as politicians?"

Hill, who will be portrayed by Scandal star Kerry Washington in the upcoming HBO film  Confirmation, says that if the Committee had treated her sexual harassment allegations fairly, the current assembly would look vastly different—and so would the current landscape for women in our country.

"If the Senate had actually conducted a thorough investigation, they wouldn't have rushed and said, 'We got to get this over with, so let's have him and her on as quickly as possible so we can go on with our business as usual.' They would have called all of the women who had come forward to talk about their experiences—experiences that were very similar to mine," said Hill. "And finally, they would have understood that an individual who violates the principles of the law should not stand in judgement of others' legal rights."

Hill then asked the crowd to imagine what today's Senate would be capable of accomplishing if her hearing had been handled more responsibly.

"We could have a Senate that served as the model for moving women forward in society," she said. "When I talk about reimagining equality, I'm talking about just that: Imagine a world where what we know as women, and what we do as women, is actually taken seriously."

"Imagine a world where full access exists, not just where women are tolerated in the workplace, but where women are honored and welcomed as contributors and valued for those contributions," she continued. "Where people aren't just satisfied that they've hired women, but a world where they feel pleased that they've hired women who they pay the same salary as men. And finally, a world where women's leadership skills are recognized and we are put in leadership positions in ways that move the entire workplace forward."

"That's not too much to ask," said Hill, who knows she can't change her past but is looking towards the future. "For me, we are on the verge of that."