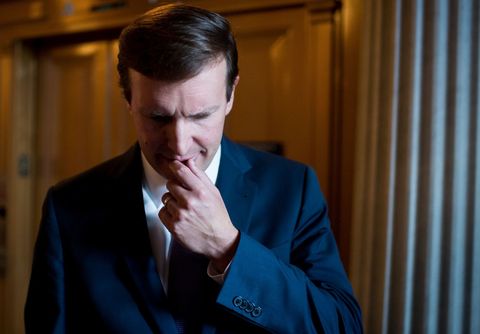 Today on the Senate floor—ongoing now for 9 hours straight—Connecticut Senator Chris Murphy and fellow Democratic supporters are engaged in a filibuster for stricter gun laws, specifically to close the "terror loophole" that allows people like Omar Mateen to buy the assault rifle he used to murder 49 innocent people in Orlando early Sunday morning. It's a moving, powerful display: politician after politician tag-teaming speeches in the Senate, determined to stop mass shootings like Orlando from ever happening again.

I am prepared to stand on the Senate floor and talk about the need to prevent gun violence for as long as I can. I've had #Enough

At 11:20 a.m., Murphy interrupted a debate about H.R. 2578—a Commerce, Justice, and Science appropriations bill—to begin his filibuster, with the hopes of pressuring Republicans to accept gun-law amendments that require universal background checks and ban suspected terrorists from purchasing firearms.

"I'm going to remain on this floor until we get some signal, some sign that we can come together on these two measures, that we can get a path forward on addressing this epidemic in a meaningful, bipartisan way," he said.

Murphy, a long-time gun-control advocate who took office shortly after the Sandy Hook Elementary massacre, has been joined by Democrats from all over the country in an effort to keep the floor occupied throughout the day and night on Wednesday as the parties negotiate behind the scenes. Interestingly, the filibuster also happens to share a date with predicted GOP nominee Donald Trump's scheduled meeting with the NRA.

"I know this is uncomfortable," Murphy said about the surprise filibuster and resulting extended hours in session. "But we just couldn't pretend that this is business as usual. That's why we're here today, to suggest that this time, it has to be different."

For Marie Claire's investigation into the relationship between women and guns, read more here.