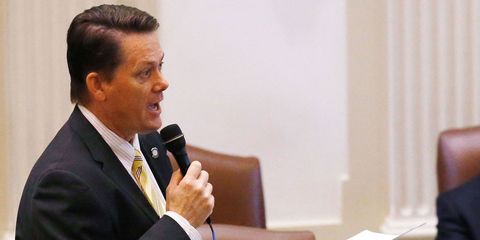 The latest assault on women's rights comes from Oklahoma, where the state legislature is considering a bill that would make it illegal for doctors to perform abortions in cases of Down syndrome or genetic abnormalities. Oh, and the icing on this horrible cake? While many laws restricting access to abortion include exceptions for rape and incest, this one does not.

The bill (which is on its way to the state senate) was introduced by Rep. George Faught, who said some truly shocking things in its defense. In fact, when asked by Rep. Cory Williams if he believes rape is the will of God, Faught said this:

"Well, you know, if you read the Bible, there's actually a couple circumstances where that happened, and the Lord uses all circumstances. I mean, you can go down that path, but it's a reality, unfortunately."

Faught later backpedaled on his wording, if not his sentiment, in a statement to KFOR. "Life, no matter how it is conceived, is valuable and something to be protected. Let me be clear, God never approves of rape or incest. However, even in the worst circumstances, God can bring beauty from ashes."

Um, a woman who is raped and then forced to keep the baby is not beautiful. It's horrifying.