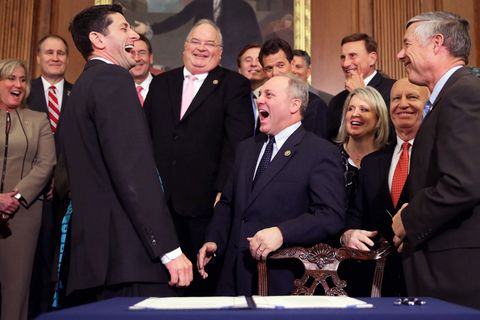 It's been quite a year. In addition to a Donald Trump presidency (and all that entails), members of the GOP have been saying some *truly* unbelievable things. And that's not hyperbole. We actually have a hard time believing that these things were said by adult humans who were elected to public office—but they were. So, here we go: presenting the craziest things the GOP have said in 2017.

In February (actually, on the same day the Senate confirmed Betsy DeVos as Secretary of Education), Massie introduced a one-page bill that would entirely abolish the Department of Education, effective December 31, 2018. Under Massie's plan, education would become the responsibility of state and local governments.

"Unelected bureaucrats in Washington, D.C. should not be in charge of our children's intellectual and moral development," Massie said in a statement. "States and local communities are best positioned to shape curricula that meet the needs of their students."

In February of 2017 (that's correct, the following happened this year and not in the distant past), James C. Green—a vice-chair in Utah's Wasatch County Republican Party—penned a letter to the editor of his local paper The Wasatch Waves, in which he un-ironically argued that equal pay is bad for women.

Utah GOP chair's letter to editor published TODAY (not in the year 1624) pic.twitter.com/FtrWWLJguL

"If businesses are forced to pay women the same as male earnings, that means they will have to reduce the pay for the men they employ...simple economics. If that happens, then men will have an even more difficult time earning enough to support their families, which will mean more Mothers will be forced to leave the home (where they may prefer to be) to join the workforce to make up the difference."

Green later apologized and resigned in the wake of massive fallout from the letter.

Iowa Republicans are pushing to ban all abortions in the state after 20 weeks, with no exemptions for cases involving rape or incest. During debate on the bill in March, state Rep. John Forbes (a Democrat and pharmacist) used his own pregnant daughter as a hypothetical example while grilling Republicans on the law's scope.

"Worst case scenario, she talks to her doctor next Wednesday and her doctor tells her, 'We don't see a heartbeat anymore in this child.' Under this legislation, she would have to carry that baby until her life became endangered?" he asked. "Is that good medicine?"

The bill in question defines abortion as "the termination of a human pregnancy with the intent other than to produce a live birth or to remove a dead fetus," meaning the scenario Forbes described should not actually be covered by it. Still, the bill's manager Republican Rep. Shannon Lundgren argued that a woman in the situation Forbes described should carry a dead fetus to term.

"Rep. Forbes, this bill wasn't written for the intent to protect or govern, on the side of the woman. It was written to save babies' lives," Lundgren said. "I would concur that—in that instance—if your daughter's life is not in danger, that yes, she would have to carry that baby."

Missouri State Senators Bob Onder and Wayne Wallingford: Suggesting that women who seek abortions should go to the zoo.

In the beginning of April, two Missouri senators made thoroughly head-scratching remarks regarding the St. Louis zoo and abortions (yes, you read that correctly). Some context: Bob Onder was against a tax hike that would benefit the zoo. He was also upset because the city had proposed a bill that would stop employers and landlords from discriminating against pregnant women, women who use contraception, and women who have had abortions. This issues ended up being...well, conflated.

In a speech opposing the tax hike, the senators compared abortion clinics to the zoo (seriously)—and Onder even filed an amendment to the tax bill saying the zoo should have to change its name to the "Midwest Abortion Sanctuary City Zoological Park." He maintains this was a joke and even released a statement asserting as much via Twitter.

In session, the jokes went beyond just the amendment name. After Onder said the zoo is more regulated than abortion clinics (noting that the St. Louis Zoo is inspected once a year), Wayne Wallingford suggested, "Maybe we should send the people that want an abortion to the St. Louis Zoo, because we know it'll be safer."

To quote: "You had someone as despicable as Hitler, who didn't even sink to using chemical weapons."

This, of course, is inaccurate. Hitler was well-known for his use of chemical weapons. Spicer later issued multiple apologies for the comment. "I was obviously trying to make a point about the heinous acts that Assad had made against his own people last week, using chemical weapons and gas," he said. "Frankly, I mistakenly made an inappropriate and insensitive reference to the Holocaust, for which there is no comparison. And for that I apologize. It was a mistake to do that."

This month, Pittman was dealt a blow when his unconstitutional bill to restore a same-sex marriage ban in North Carolina failed to pass. Commenters came after him on Facebook, and (in a now-deleted comment) Pittman compared Abraham Lincoln to Hitler—calling him a "tyrant" and referring to the Civil War (which brought about the abolition of slavery) as "unnecessary."

"And if Hitler had won, should the world just get over it?" he wrote. "Lincoln was the same sort if tyrant, and personally responsible for the deaths of over 800,000 Americans in a war that was unnecessary and unconstitutional."

Oklahoma Rep. Markwayne Mullin: It's "bullcrap" for constituents to say they pay his salary.

During an April town hall meeting, Republican Congressman Markwayne Mullin took issue with the idea that taxpayers pay his salary. His reasoning? He's paid enough in taxes over the years to have covered his own salary. He essentially sees the job as a volunteer position.

"You said you pay for me to do this. Bullcrap. I pay for myself," he said. "I pay enough taxes before I ever got there and continue to through my business. This is a service; no one pays me to go. I do it as an honor and a service."

New Jersey Rep. Leonard Lance: Suggesting that Planned Parenthood split into two organizations—one that performs abortions and one that doesn't.

Lance also hosted a town hall this month. During his, a constituent pressed him about Planned Parenthood, and asked if he would continue efforts to defund it after the GOP's Obamacare replacement failed.

Lance's solution—to split Planned Parenthood into two organizations; one that does all the stuff he approves of, and one that performs abortions—garnered boos from the audience.

Wisconsin Rep. F. James Sensenbrenner Jr.: "Nobody's got to use the Internet."

This month, Sensenbrenner addressed citizens at a town hall. When one attendee brought up concerns over the elimination of online privacy protections, the Congressman countered by saying that people can just opt out of the internet if they don't like having less privacy online. Since this is 2017 and using the internet is no longer optional, people were not having it.

"Facebook is not comparable to an ISP. I do not have to go to Facebook," the town hall attendee said. "I do have one provider.… I have one choice. I don't have to go on Google. My ISP provider is different than those providers."

"Nobody's got to use the Internet. … And the thing is that if you start regulating the Internet like a utility, if we did that right at the beginning, we would have no Internet. …Internet companies have invested an awful lot of money in having almost universal service now. The fact is is that, you know, I don't think it's my job to tell you that you cannot get advertising for your information being sold. My job, I think, is to tell you that you have the opportunity to do it, and then you take it upon yourself to make that choice.… That's what the law has been, and I think we ought to have more choices rather than fewer choices with the government controlling our everyday lives."

Kayleigh Roberts Kayleigh Roberts is the weekend editor at Marie Claire, covering celebrity and entertainment news, from actual royals like Kate Middleton and Meghan Markle to Hollywood royalty, like Katie Holmes and Chrissy Teigen.
This content is created and maintained by a third party, and imported onto this page to help users provide their email addresses. You may be able to find more information about this and similar content at piano.io
Advertisement - Continue Reading Below
More From Politics
America Has a Dark History of Forced Sterilization
Alicia Garza Says Voting Is a Form of Protest
Advertisement - Continue Reading Below
Twitter Reacts to Amy Coney Barrett Confirmation
What's at Stake for the Environment in November
When Will We Know Who Won the Election?
A Guide to Celebrity Presidential Endorsements
A Debate Coach Grades Final Presidential Debate
Twitter Has Thoughts On the Presidential Debate
Can You Vote Online in the 2020 Election?
What's at Stake for Abortion in the 2020 Election