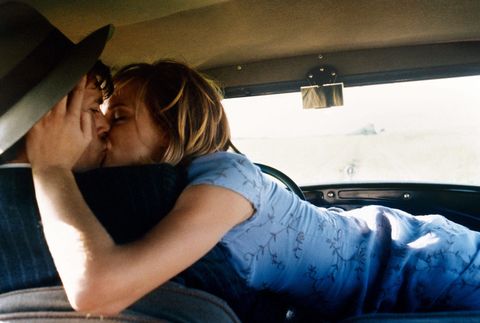 AT THE BERKELEY CAFÉ WHERE WE MET, Tim leaned on the table, his T-shirt riding up over his curved biceps. I've always gone for swarthy types, and with his dark Irish eyes and widow's peak, he was even sexier in person than in his online-dating profile photo. Unlike other first dates who yammered on about themselves ad nauseam, Tim asked a lot of questions. I took a sip of my cappuccino and fantasized about him lounging in my breakfast nook, clad only in boxers. "Enough about me," I said. "What's your line of work?"

"I'm a graduate student in American history," he said. "I hope to teach someday." I put my cup down. Had he mentioned this in his profile, I would have deleted his message instantly.

I know that might sound shallow, but let me explain. My dad was a surgeon; my siblings and I grew up in a three-story house in Indiana and attended private schools. My home life was miserable, but money—or rather, the things money could buy—distracted me from my despair. Counting down to our annual Florida vacation kept me afloat on the bad days, as did making lists of everything I wanted for Christmas or buying a new pair of boots. Money provided tangible relief when I felt overwhelmed by the toxic emotions pulsing through our family. As I grew older, my measure of a man became his salary and ability to provide the comfort that once fell to my father. Furthermore, as a writer—a miserably low-paying profession—I'd always gravitated toward boyfriends with pockets deep enough to cover our living expenses. I wanted a husband who could subsidize my artistic ambitions, and a teacher-writer pairing seemed destined for ruin, especially in the pricey San Francisco Bay Area.

WHEN I MET TIM, I WAS 35 and newly single after ending a long relationship. My ex was handsome and gregarious and earned a hefty salary. We were compatible in every area except one: sex. I craved it; he avoided it. We'd started planning our wedding when I realized that, after six years of initiating every sexual encounter with him, I didn't want to spend the rest of my life with a man who wanted to be "cuddle buddies."

For our third date, he invited me to the symphony. I dressed in black silk and wore diamond hoops. My heart sank when Tim pulled up in a dented pickup truck, and I hoped nobody saw me push open the creaky door and step out when we reached the Civic Center. But on the drive back home, when he put his hand on my upper thigh and kept it there, I couldn't wait to ask him inside. "One last drink?" I asked when we reached my street. We sat on opposite sides of the sofa until he finally pulled me onto his lap. He kissed me softly at first, and when he left a half-hour later, I still wanted more. "Let's not rush this," he said.

The first time we slept together, it was sublime. Afterward, as we stared at the ceiling in wonderment, we both acknowledged that it was the best we'd ever had. Everything about him turned me on: his warm, broad chest; the way he called me "doll"; how he always seemed to be happy. But he was still a penniless graduate student, and I grew irritated when he complained about high menu prices or ordered the cheapest house red. Financial security became even more crucial a few weeks later, when I quit my job to work on my first book. I had no idea whether I'd be able to sell it before my meager savings evaporated. Tim's money worries only exacerbated my own.

At first Tim joked about our situation, but then he got fed up. "Look, I'm 36. My biological clock is ticking," he said as we cuddled post-sex one day. "I want a wife. I want kids." He accused me of being a "situational feminist"—only interested in gender equality when it benefited me. I knew he was right, but I turned away and refused to continue the conversation. He broke up with me the next day.

Two weeks went by and I felt like I was going through withdrawal. I didn't just miss the sex; I missed our friendship, our laughter, our discussions of politics and literature. Somehow, quietly, I'd fallen in love with him. I thought about my moneyed childhood and how unhappy and lonely I was for much of it. What I craved as a girl was love, which Tim offered in abundance.

I sent him a groveling e-mail. "Could we just meet for coffee? We don't have to talk," I said. My heart felt sore from missing him. My pulse quickened when he walked in. He told me he was dating a classmate; I was furious that he'd moved on so quickly and stormed out in a fit of jealousy. He trailed me to my car. "But you didn't want me," he said, his voice almost breaking. Then: "I couldn't stand it anymore because … I love you." Something relaxed inside me, and I buried my face in his chest. I knew he was the best man for me, no matter how little money he made.

With my commitment to Tim came a commitment to my career: I'd need to work harder to afford our dreams of buying a house in a decent neighborhood and taking vacations to Spain. Sometimes I feel a twinge of jealousy when my friends who married rich talk about second homes in Tahoe. That's the life my ex-fiancé offered me. But I also know the price many pay: Their husbands work late, so the bulk of the child care and housework falls on them. At our place, you'll find Tim cooking supper or dancing with the two little girls we now have. And while living on a shoestring budget can be stressful, we know of a fantastic tension reliever—one that deepens and renews our relationship every time we do it.

WHICH IS MORE IMPORTANT TO YOU IN A LONG-TERM RELATIONSHIP?