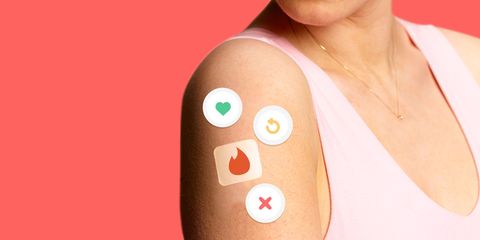 Emotional numbness. The ability to come up with whip-smart double entendres on the spot (actually so useful in so many situations, IMO). Jacked thumbs. These are the symptoms of dating-app addiction, a disease that affects millions of Tinder/Bumble/Hinge/ FarmersOnly users across the globe. Here, five women—some in recovery, some relapsed—on finding heart in a heartless dating culture and what it's like once you make it to the other side.

"I feel so much less pressure after quitting the apps. I hadn't realized how much of my free time was spent swiping through hundreds of faces. Now that I have stopped, I have so much more time to engage in real-life conversations with my roommates instead of being sucked into my apps with my thumb glued to the phone.

I went on a slew of bad dates, and the worst one put me over the edge. Within five minutes of meeting me, the guy asked me if I was getting my master's degree to increase my salary since, 'teachers don't make very much money.' My jaw was on the floor. Then he spent the rest of the date bragging to me about his Ivy League education and all of the exotic travel plans he had coming up. That was it for me!"—Allie, 25, Chicago, IL, 4 months clean

"While having a steady stream of guys complimenting my smile and asking to play 20 Questions at my fingertips was entertaining, one day, after swiping through users unconsciously, I decided to quit. Tinder was more like Tetras than eHarmony. I was looking to start something romantically and was still trying to figure out exactly what I wanted. But Tinder wasn't helping—it was just a distraction. My intentions were as unclear to myself as they were to the guys who kept nudging me to hang out. Although a number of my friends have met their significant others through Tinder, I still haven't come to terms with having to devise a 'how we met' story. I love not having Tinder. I'm not constantly reminded or harassed about my relationship status. Better yet, when I meet a guy in person, I can actually tell what he means when he says something and don't have to send a message to my friend to decode the sexual innuendo." —Chelsea, 22, Brooklyn, NY, 3 months clean

"When I meet a guy in person, I can actually tell what he means when he says something."

"I quit dating apps because I realized the men I was meeting through them weren't looking for real relationships like I was. It seemed like I had been on endless 'dates' where the men were smart, courteous, and interested in me, but they ghosted immediately after I hooked up with them (usually the third date). Since I have a lot of confidence in my hookup game, I realized they were waiting it out for easy sex and weren't trying to find a compatible partner, no matter how genuine they seemed at first. I eventually gave up on the apps altogether and decided to focus my energy on real-life men. Unfortunately, it turns out men IRL aren't so different from dating-app men, and I'm still waiting on my Prince Charming. In all honesty, I think the dating game is a sham, and I'm more likely to fall in love with my geeky best guy friend than I am to meet the man of my dreams on a 'date' of any kind."—Sally, 25, Chicago, IL, 1 year clean

"I reactivated my Tinder profile approximately one month after the end of a serious two-year relationship. I figured I was single and having fun, but quickly realized Tinder was only confusing me more. After a few failed awkward meet-ups, I decided to delete it and completely focus on myself like a true post-heartbreak cliché. Being Tinder-free is amazing. Attention is nice, but dating myself is so much better. Not to mention no weird messages about 'the swirl.'"—Simedar, 22, Brooklyn, NY, 1 month clean

The one who, against all reason, still has hope

"Reasons for being Tinder-free: Following a string of uncomfortable, boring, or bizarre dates—including meeting up with someone who looked 0 percent like his profile pics and a guy who bragged about his painkiller addiction—I decided to take a break from using the dating apps. I felt like every person I met in real life did not match up to my app-based expectations of them and was constantly disappointed. The other issue I kept encountering was a general lack of interest and caring—I'd accidentally forget to respond to a prospective date for five days or someone I'd gone on one or two casual dates with would disappear off the face of the Earth with no explanation. The dating apps almost made it too easy to meet people, so as a result, the interactions felt inconsequential and meaningless. I didn't so much decide to stop using online-dating apps as simply forgot to check any of them. For about four months. The result was more free time, more time spent with friends, and less time worrying if I was coming up with flirty yet clever responses to strangers' messages or had picked cute enough profile pictures.

"The dating apps almost made it too easy to meet people, so as a result, the interactions felt inconsequential and meaningless."

While I can't say my dating life skyrocketed—maybe the opposite—it was kind of liberating to not be thoughtlessly scanning potential suitors whilst bored at work, and not nixing people solely based on some stupid quote in their 'About Me' section. The people I've met outside of dating apps have been friends of friends, which usually means you have more than just a person in common; you have similar backgrounds or a sense of humor or are both obsessed with the toothless kid in Stranger Things. I still like to peruse Bumble or Hinge occasionally just to see what's out there, but I haven't found that I'm missing much."—Catherine, 25, New York, NY, 4 months clean (though "crumbled from societal pressure and did some light Bumble-ing" last week)