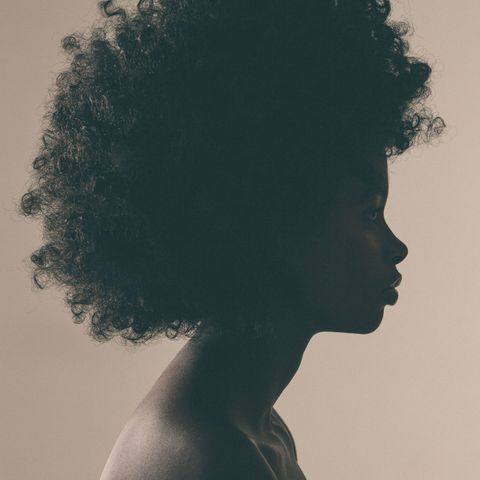 Where I come from, "good hair" is fine and straight—no exceptions. Once a month, my mother would use a hot comb to straighten mine and my sisters' hair. She would place the iron comb on the stove just above the pilot. When it got hot enough, she would take the comb and gently rake it through the hair several times, stopping only when she was satisfied with the new smooth texture—and at the expense of physical harm. I have been singed many times in the name of vanity.

By 16, I was chemically straightening my hair every day to get that smooth, silky look.

Cut to many years later and I'm the chief diversity officer for a Fortune 500 company. Like many executives, I adhere to the corporate uniform: suits, conservative dresses, and flat-ironed hair. Much like when I was a little girl, this process takes up to 20 minutes each morning— if I don't wash it first. But it's worth it. As a woman of color, I have to be mindful of the way I navigate corporate America in order to be viewed as professional. There are unwritten rules.

"No one is going to come out and tell you that your hairstyle is a problem. You will likely figure it out over time."

No one is going to come out and tell you that your hairstyle is a problem. You will likely figure it out over time, when you're continuously passed over for a job, a promotion, or a particular assignment. If you have aspirations to reach the next level of leadership, you have to play ball—something I did for years.

Until I had a health issue that compromised that routine.

During the summer of 2013, my annual mammogram revealed that I had a suspicious mass in my right breast. The mass turned out not to be cancerous, but the procedure left me with a two-inch incision and stitches that were extremely painful. I was out of the office recuperating for two weeks.

As I was healing, I had difficulty lifting my right arm to comb my hair. The pain from trying was excruciating—I felt a stinging sensation that traveled from my bicep to my armpit. I paused. What would happen if I simply washed my hair and let it air dry?

By the time of my surgery, I had been chemically processing my hair my entire life. I was worried: Had I ruined my natural wave and curl pattern with the years of hot comb and chemicals?

For the first time in more than 30 years, I washed my tresses and let them air dry—and I watched my curly ringlets come to life. The more my hair dried, the happier I became.

I tried this method for a few days, experimenting with a number of shampoos and conditioners specific to curly hair. After a few attempts, I enjoyed the bouncy, curly results.

As I planned to return to the office, I started to research natural hair maintenance. Would I be able to keep this up? After a consultation and styling, I decided that I wanted to live a healthier lifestyle from the inside out—which included nutrition, exercise, and an end to chemical processing all together. I decided to stop chemically treating my hair for good.

I woke up two hours early on my first day back. I felt anxious about revealing my new hair to the world. What would my colleagues think? Could I pull off the new me? Would they think I was attempting to make some kind of political statement?

I was seized by another, more pressing question: Would this new style be acceptable in the boardroom?

On that same day, we had a global leadership team meeting, which meant that all of my colleagues from around the world would see me. I decided to put on my best dress, coif my hair in a soft, curly style with a side part, put on my makeup, and go to work.

As I suspected, my hair was the topic of conversation for many at the meeting. One female colleague pulled me to the side and said, "Why on earth did you do that? "

"Could I pull off the new me?"

And then a Black female colleague stated, "In my opinion, some hairstyles are just not appropriate for the workplace." I was deflated.

Ironically, my superiors were extremely complimentary. The CEO and his chief of staff told me how much they liked my new look. Several of my female peers praised me for having the courage to show a more authentic side of myself. A few of the more junior women even told me they had considered letting their hair go naturally curly and that I'd paved the way.

I'll admit now that I was afraid: first, of the conversations it would spark with my peers and superiors, both Black and white, and second, of the deeply ingrained racial issues regarding what constitutes "polished"—I just wasn't prepared to address them at the time.

It's been almost three years since I stopped straightening my hair. I have since left the corporate world and now run my own consulting practice. As an entrepreneur, I'm a lot less concerned about my hair—but mainly, I'm a lot less preoccupied with what others think about it.

This content is created and maintained by a third party, and imported onto this page to help users provide their email addresses. You may be able to find more information about this and similar content at piano.io
Advertisement - Continue Reading Below
More From Beauty
Euphoria-Inspired Makeup Ideas Still Slap
65+ Scary-Glam Halloween Makeup Ideas to Bookmark
Advertisement - Continue Reading Below
These Beauty Treatments Are Some of Our Faves
Created for From Marie Claire for Created by Marie Claire for
European Wax Center
Olivia Culpo Shares Her Routine for Radiant Skin
Anti-Aging Moisturizers That Really Work
Diet Is a Key Part of Lo Bosworth's Beauty Routine
Self-Care Products to Treat Yourself To
Madelyn Cline Explains Her Glowing Skin Routine
Actress Adria Arjona Believes in Face Icing
The Best Clay Masks at Every Price Point