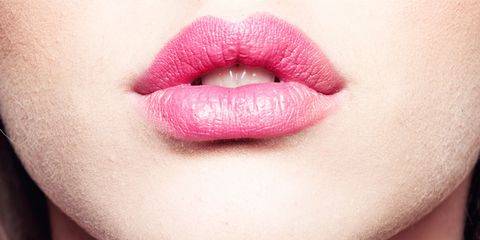 Thanks in no small part to Kylie Jenner's plumped-up fish gape, they're a full-on obsession in the cultural zeitgeist. And because of the major surge in filler injections, like Botox and Juvaderm, when we come across a full pout these days—be it IRL or on the cover of a magazine in the grocery checkout line—it begs the did-she-or-didn't-she? question like never before.

Honing in on this phenomenon is a newly-released study conducted by JAMA Facial Plastic Surgery, which seeks to indentify what characteristics of cosmetically-enhanced lips veer into artificial-looking territory. The research was conducted by two plastic surgeons, Dr. Sang W. Kim and Dr. Daniel E. Rousso, who were looking to gain a better understand of how much is too much?

"One of the main challenges for clinicians is to know when to stop treating the lips before the results appear artificial and unnatural," they state in the study. "Despite the best intentions, this decision can sometimes lead to misguided and unintended consequences."

The doctors asked 98 volunteers (76 women and 22 men) to view digitally-morphed photos of a 35-year-old woman's lips in which the upper lip, lower lip, both lips, and the cupid's bow were manipulated at increments between 1 mm and 5 mm. The photos were uploaded to an online questionnaire and participants rated each photo in random order according to whether or not they thought they were attractive and if they thought they looked natural or unnatural.

If you're looking to firmly decipher whether or not someone has had injections, be forewarned: A major takeaway for the surgeons was that a quantitative measurement of the lips as a fixed guideline for augmentation isn't exactly realistic—there are just too many individual variables.

However, there are some key takeaways from the results that could hint at artificial alteration to the lip area if you're looking out for it.

2. Alterations to the Cupid's bow are risky. The study found that any alternation to the Cupid's bow resulted in the narrowest margin for artificial appearance. So basically, if the natural double-arch shape has been comprised by too much filler, the human eye really picks up on it.

Lauren Valenti Associate Web Editor I’m the associate web editor at Marie Claire.
This content is created and maintained by a third party, and imported onto this page to help users provide their email addresses. You may be able to find more information about this and similar content at piano.io
Advertisement - Continue Reading Below
More From Our Best Beauty Tips and How-Tos
Pore-Cleaning Devices for Playing Dermatologist
19 Super Pretty Valentine's Day Makeup Tutorials
Advertisement - Continue Reading Below
Give Your Hair the Gift of a Gentler Shampoo
The Lazy-Girl Way to Make Your Lips Look Bigger
Your Winter Skin Deserves a Facial Steamer
How to Actually Minimize Your Pores
Homemade Face Mask Recipes for Skin That Glows
Fine Line Treatments That Work
Facts to Know Before You Get a Keratin Treatment
Vitamins That'll Give You Your Best Hair Ever