Today's Top Stories
1
Marie Claire Wants You to Vote
2
WORTH IT: Vitruvi Stone Diffuser
3
The All-Time Best Online Thrift Stores
4
Katie Holmes' Stylist Revolutionized My Wardrobe
5
How to Give Yourself a Great At-Home Manicure
Imaxtree

From the skinny '90s eyebrows that hadn't quite grown back yet to the lipstick frostier than a Krispy Kreme donut, the 2000s were a rough time for beauty in general. But the makeup bag staple that became most infamous? That would be bronzer. With product and application that erred on the side of Cheeto-dusted, bronzer needed some major damage control in the years that followed. And while it no longer has a bad rap, the OG of contouring still mystifies women.

Here, two pro makeup artists break down everything you need to know about bronzer—because aside from harmful UV rays, it's the only thing that'll give you a healthy, sun-kissed glow this summer.

"There used to just be one unflattering shade of terracotta on the market and it was completely wrong on so many people," says Lijha Stewart, director of education and artistry at Make Up For Ever. "Never settle for the wrong color—there's something out there for every skin tone, whether you're fairest of fair or the deepest of deep."

2. Applying it is *so* much easier than you think

No need for video tutorials here. Simply sweep or tap the product on the parts of the face the sun would naturally hit you: the tops of the forehead, cheeks, nose, and chin.

According to Stewart, those with fair skin should seek golden undertones to mimic that sunkissed look. For medium complexions, go warmer, and shoot for something a little rosy. For deep complexions, pure red undertones will make the cheeks pop.

4. The texture is key when it comes to your skin type

"For dry skin, I like to mix liquid bronzer into the foundation for a dewier finish that won't get flaky on dry patches," says NYC-based makeup artist Meghan Gibson. As for the oily end of the spectrum, she suggests a matte powder sans sparkles or shimmer, which could draw more attention to any summertime sweat on the T-zone.

5. Your brush could be causing streakiness

If you've ever gone from 0 to 100 in one stroke, chances are you're using the wrong tools. "Dense, smaller brushes used for contouring make it easy to overdo it," says Gibson. "A large, fluffy, and dome-shaped brush with soft fibers will disperse the color gently and evenly." If you're trying to streamline your makeup bag, your blush brush is also a suitable option.

6. If you're contouring and highlighting, bronzer is even more essential

"A ton of artists have an addiction to harsh contouring, but they're forgetting to put healthy color back into the face," says Stewart. "After sculpting the face with cool tones, I come in and warm things up again."

7. Self-tanner isn't doing you any favors

"For whatever reason, some people were taught to apply a light shade to the entire face to give the appearance of a tan, and they just end up looking flat," says Gibson. If you're going to use it, at least go the tontour route. 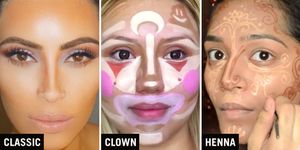