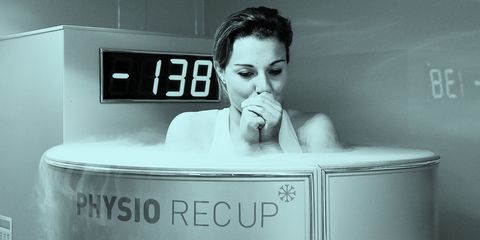 Update, 11/7: Though the case of a young woman freezing to death in a cryotherapy chamber has been officially ruled as an accident, the tragic incident involving Chelsea Ake-Salvacion has sparked many questions and concerns about the practice. In particular, the potential safety hazards and necessary precautions that at this point have not been regulated or monitored.

While typical whole-body cryotherapy chambers encase the individual in freezing temperatures from the neck down, Ake-Salvacion was found frozen in the fetal position with her cell phone nearby. The New York Times reports that her family's lawyer, Richard A. Harris, is suggesting Ake-Salvacion may have dropped her phone and reached down to retrieve it, becoming trapped in the chamber where the high levels of nitrogen and minimal oxygen would've caused her to pass out and freeze.

Original Post, 10/26: Like an episode of Bones but way freakier because it's real, a 24-year-old Las Vegas woman was found dead inside a cyrotherapy chamber Tuesday. Medical examiners suggest she was literally flash-frozen, dying within "seconds."

According to the Washington Post, esthetician Chelsea Ake-Salvacion was alone in the medical spa she managed when she entered one of the -240-degree chambers, which allegedly reduce inflammation, boost immunity and metabolism, and improve skin tone, among other health and aesthetic benefits. Results from the autopsy are still pending, but investigators initially ruled "operator error," a charge her family denies.

The FDA has not approved the treatment, so even more reason to think twice about stepping nearly naked into a metal pod cooled to temperatures lower than those on the summit of Mount Everest.

Chelsea Peng I'm Chelsea Peng, the assistant editor at MarieClaire.com.
This content is created and maintained by a third party, and imported onto this page to help users provide their email addresses. You may be able to find more information about this and similar content at piano.io
Advertisement - Continue Reading Below
More From Beauty
It's Time to Get a Triple Barreled Curling Iron
Jennifer Garner Shares Her Hack for Full Hair
Advertisement - Continue Reading Below
24 Hours in the Life of a Beauty Retailer’s CMO
Created for From Marie Claire for Created by Marie Claire for
Dermstore
Marion Cotillard Sings and Dances for Chanel
Black-Owned Beauty Brands You Need to Know
The Queen's Gambit Is a Beauty Fever Dream
The Dry Shampoos You Can Really, Truly Count On
The Ultimate Guide to Hair Extensions
Billy Porter Wants to Mask With You
Exactly How Long to Go Between Haircuts