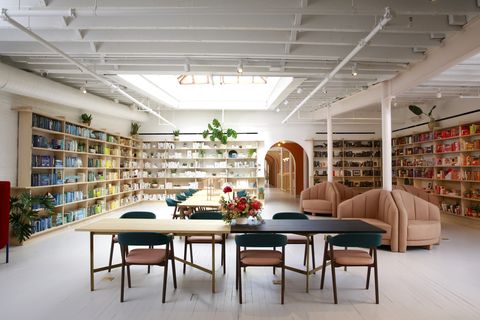 Founded by former political publicist Audrey Gelman and businesswoman Lauren Kassan, The Wing has curated a co-working space and community club of over 1,500 professional women to work, create, and collaborate. As they prepare to enter their second year, Gelman and Kassan have *officially* opened the doors of The Wing's second location in SoHo, and it's a feminist heaven (no, really—it's completely designed by women).

"There’s something powerful about the idea of large groups of women gathering together."

The 10,000 square-foot SoHo space (three times larger than the original NYC Flatiron location) includes half-a-dozen phone booths for private calls, a beauty room, a breastfeeding room (!), showers, a café, a nap room (!!!), and open areas for lunch meetings and other collaborations. The aesthetic represents the community vibe, which is described as "a coven, not a sorority" via The Wing's Instagram.

"There’s something powerful about the idea of large groups of women gathering together," says Gelman. "There’s a lot of magic that gets created in this space with women meeting each other for the first time...it feels magical."

Gelman continues, "With this new, much larger space we can have so many more members, which we’re so excited about. We’re definitely looking closely at new categories of membership. We’ve had a lot of women that have been on our waitlist for a while."

"I think a lot of the women who joined in the beginning were friends and friends of friends so they were around our age, but we have a ton of members joining who are from different generations—they’re starting their second career or working on new projects," explains Gelman. "It’s really important that members wouldn’t normally meet outside of these four walls," adds Kassan.

Aside from providing a workspace for women, The Wing has held voter registration events, hosted speakers such as New York Senator Kirsten Gillibrand, and even created an event called "Fuck Harvey Weinstein" following the news of over 30 women coming forward about the years of sexual assault, harassment, and unwanted advances from the Hollywood producer. Select events are open to non-members, and it's encouraged for current members to bring guests to experience the space and the programming.

For women eager to join but concerned about the waitlist, The Wing SoHo will eventually be one of four locations—with plans to open in Brooklyn and Washington, D.C.—in hopes of providing more inclusion for members. Gelman has *even* hinted at potentially expanding outside of the U.S. one day.

"Our ultimate goal is to watch communities of women grow. We have two members who just started a law firm together who met here for the first time. We have members who have never met before that are planning trips together, women who have a potluck dinner every Sunday night at each person’s house...that’s the part of it that’s really amazing to watch and we’re so passionate about," she says. "We’re excited to continue facilitating these connections between women, meeting a lot of new faces, and growing our community."

The Wing SoHo officially opens October 30. For more information on The Wing and applying for membership, visit their website.

Rachel Epstein Associate Digital Editor Rachel Epstein is the associate editor at Marie Claire, where she covers culture, lifestyle, and politics.
This content is created and maintained by a third party, and imported onto this page to help users provide their email addresses. You may be able to find more information about this and similar content at piano.io
Advertisement - Continue Reading Below
More From Money & Career
How to Afford the Freelance Life
Freelance With Benefits? You Bet.
Advertisement - Continue Reading Below
How to (Mentally) Make the Be-Your-Own-Boss Move
The Gray-Area Economy
Black Women Are Making Their Own Space In VC
The Best Finance Podcasts Out There
The Big Business of Activism
How the WNBA Pulled Off a Slam-Dunk Season
What Happened at Marie Claire's Power On Event
Is My Workplace Watching Me?