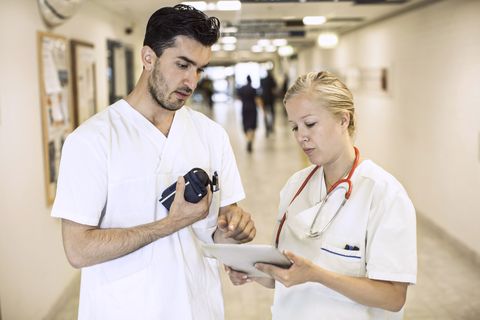 Less than 10 percent of nurses are male. But they make an average of $5,100 more per year than their female counterparts, according to a new study in the Journal of the American Medical Association.

"Fifty years after the Equal Pay Act, the male-female salary gap has narrowed in many occupations," the study's authors write. "Yet pay inequality persists for certain occupations, including medicine and nursing."

The gap was largest between nurse anesthetists—men made a whopping $17,290 more in a single year than their female colleagues. Nurse in that specialty are also much more likely to be men than nurses generally—men make up 40 percent of nurse anesthetists.

Lead author of the new study and assistant professor of social behavioral sciences at the School of Nursing of the University of California, San Francisco, Ulrike Muench told The New York Times, "You may think women have caught up or even might be ahead of men [in nursing], but we find that's not the case."

Jill Filipovic senior political writer Jill Filipovic is a contributing writer for cosmopolitan.com.
Advertisement - Continue Reading Below
More From Money & Career
Women Are Allowed to Be Mean Bosses, Too
The Couple Who Made an App to Control Finances
Couples + Money
Advertisement - Continue Reading Below
The Right Questions to Ask on a Job Interview
Brie Larson Gave Me the Best Career Advice
Payal Kadakia Raised $1Billion—While Pregnant
Birchbox Boot Camp
The Couple With a Hugely Successful Finance Blog
Couples + Money
Dating When You're $120,000 In Debt
How to Lead a Big Meeting With Confidence
The Couple Who Paid Off 21 Credit Cards
Couples + Money