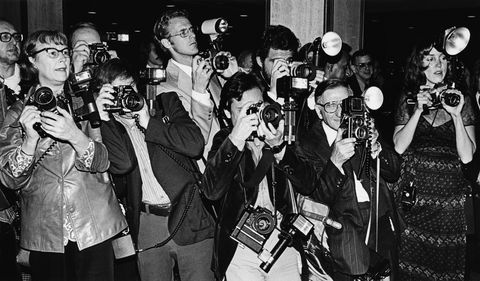 1. There are almost no women in this industry, and it's really hard to work in it as one.

There are only about five female paparazzi at any given time in L.A. I didn't know if the hate would ever stop and I was getting so beaten up—it was just so oppressive. The guys were so nasty, so mean. I write in my book, Shooting Stars: My Unexpected Life Photographing Hollywood's Most Famous, that I have been spit on, pushed down, run off the road, and "told on" for things like getting in a shot or poor driving, but this abuse is always done behind your back. I was never spoken to directly.

2. Papping is not for people who aren't competitive or thick-skinned.

The absolute hardest thing about the job was the other paparazzi. It's a very competitive business. Until you have established yourself as one of the top dogs and until you've gained the respect of others, then the guys are going to try and get you out of the business. The day that it all changed was when I shot Jennifer Aniston at the beach about nine months in. Ironically, I didn't make any money on that shot because other photographers got the same one, but it was just so valuable to me career-wise and professionally because Jennifer Aniston was such a big star and [usually] so hard to get in photographs, [and] everything changed for me.  I got total respect in the business, and everyone started leaving me alone and even looking up to me.

3. You need to be really skilled at more than just photography.

Paparazzi shots are a really technical style of photography, and I guess I can compare it to war photography or animal photography. You have to have a crazy amount of street smarts, because you're basically a spy. You need to be quiet and behind the scenes. You have to understand the way people think, how they work, which way they're going to go. You think ahead of the people that you're following or other paparazzi in order to get the celebrity as they reach their destination.

4. If you're going to work freelance (as opposed to being fully staffed with an agency), it will be hard to make a living.

I was papping from 2006 to 2009 and I actually made a lot of money doing it. But there's not very much money in paparazzi right now anymore. With the rise of Instagram, celebrities have the power to take the shots themselves, sometimes making paparazzi shots worthless. If you're really good, you might be lucky and make $75,000, but you probably have $20,000 or $30,000 of expenses a year on top of that. In addition, you probably can spend $30,000 in equipment. You spend a lot on gas. You spend money on tips [people who call you to tip you off to where a celebrity is are oftentimes rewarded with money as a gesture of goodwill]. Your office is Beverly Hills, West Hollywood, and Santa Monica, which are awesome but expensive places to hang out because you're spending a lot of money on food and all that kind of stuff. You need a really reliable, good car, which is another $30,000.

5. Being freelance offers a lot of flexibility and freedom, but it can get pretty lonely.

One of the main reasons to be tied with in agency is for camaraderie and brainstorming with people about who to work and what to do. Otherwise, you can go for days completely on your own. But there are lots of benefits to being a freelance photographer. When you are really well-established, you can do what you want. I took one photo of Molly Ringwald one time that was really unflattering that I didn't send in. I love Molly Ringwald, I grew up with Sixteen Candles and The Breakfast Club, and so I did not want the tabloids making fun of her based on my photograph. I really liked the autonomy of the [freelance] business. I got paid based on how I performed, and if I wanted to take two months off and go to Thailand, I could and I did! If I wanted to not work Sundays or after 5 o'clock, I could do that too.

6. You'll be in a new place nearly every day.

You get up at 9 a.m. and grab a coffee, and at the same time, you're looking for celebrities at the coffee shop. From there, you can do one of two things. You can either doorstep, which is when you are assigned or you assign yourself to a particular celebrity, and you go sit outside their house and hope they leave. You could doorstep a gym or a restaurant or an area of town or a city block that celebrities go to a lot. Or you can troll and just drive around looking for celebs. You start to know and memorize their cars. To be honest, I can recognize a celebrity from a long way away just based on the way they walk and the way they wear their hair. You become really good at people-spotting.

7. You can make great money off a single photo, but you can't expect to make a living taking great photos every so often.

There were probably three or four photos I've probably made anywhere from $6,000 to $9,000 each. It's hard to figure out exactly how much you make off a single picture because money comes in really slowly — you make money off residuals over one or two years from a bunch of different sources. I think Paris Hilton holding the Bible right before she went to jail was one of my big shots. I only probably made about $8,000 on that, which, based on the fact that it was all over the world, was not very much money. It's all about working every day. If you decide, "Oh, I can do this job," and bank on three times a month getting big photos, you're not going make it. You have to go out five days a week like a normal job and then you'll end up developing a good library and having shots sell over time.

8. The relationships between celebrities and paparazzi varies from person-to-person, but generally, the celebs want to work with you.

The relationship between paparazzi and celebrities is very symbiotic. A lot of the people that you're working on on a day-to-day basis want to be in magazines and are not nasty with you. I remember one of my colleagues when I was first getting started said to me, "If you can make them smile, you're golden." Most people look at the covers of some of the seedier tabloids and they see really negative stories that make it look like the tabloids are all about trashing the celebrities. But 90 percent of what we photograph, and 90 percent of what the public wants and buys are happy celebrities looking stylish with their head up, smiling. Those pictures are what the tabloids want to buy, and those require us as paparazzi to be non-antagonistic with the celebrities and to actually even develop friendships with them. As much bad press paparazzi get, I have to say, in my almost three years of doing it, I never saw a paparazzi taunt a celebrity to try and get a photo. I'm sure it's probably happened, but I've seen thousands of shoots and I've never seen that.

9. Certain celebrities are much more paparazzi-savvy than others.

When I was working, Paris Hilton was the absolute best and smartest. She's a brilliant media goddess who doesn't go anywhere without completely planning the shots the paparazzi will take. Cameron Diaz is another one who I love. She's just brilliant. She uses the paparazzi when she wants to and when she needs it: When she and Justin Timberlake broke up, she wanted to get photographed all the time looking super hot and totally used us. We were all here for the use! We were like, "All right, you're making us money. We'll help you, you help us."

10. A celebrity breakdown is difficult for a pap too.

To be honest, when Britney was breaking down, we were her only friends there for, like, a year. She dated a paparazzo! Even though it was kind of sick that she got all her affirmation from us, she did and we were really, really rooting for Britney during that period of time. I wasn't working on her every day, but there was a group of guys who worked on her every day and they became very close with and very protective of her. Not only because they were making money but you start to care about people as human beings when you're with them all the time.

11. Being starstruck gets old pretty quickly.

Toward the end, it was so hard to become starstruck, so I would need to see someone like Brad Pitt in order to have a good day. I was so bored of Miley Cyrus and Zac Efron and Paris Hilton and all these people that are very famous but would so not excite me. Having connected with so many celebrities, it would have to be someone really big.

If you wanted to do something wild and exciting just for fun for a few years, you could do it. I knew another girl who was in it for that reason. She was awesome, we were really good friends, but she only lasted less than a year. She was just in it because she loved celebrities and thought it was super fun, but when things got hard and she realized how hard it was to really make money, and how trained and on-the-ball you needed to be to make money, she got out of it. I stayed in the business longer than most people, but toward the end, I barely worked eight hours a day because I was pregnant and I was also so over it. After that, I retired my camera except for baby pictures (and the occasional celeb who crosses my path).

Jennifer Buhl was a top-selling female paparazzo in L.A. from 2006 to 2009 and author of the book Shooting Stars: My Unexpected Life Photographing Hollywood's Most Famous. She now lives in Denver, Colorado, and runs Happy Hour Headshot.