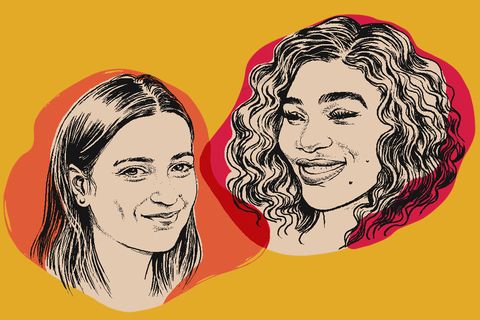 Make (And Use) Connections

After Alison Rapaport graduated from the University of Pennsylvania with an economics degree in 2011, she spent five years in J.P. Morgan’s Asset Management division before enrolling in Harvard Business School. A football fan, she interned one summer at Wasserman, a talent agency representing athletes. Then Stuart Goldfarb, Carmelo Anthony’s business partner, recruited her for a gig. He later introduced her to Chris Lyons of premier Silicon Valley venture-capital firm Andreessen Horowitz. Lyons passed her resume to angel investor Serena Williams, who was hiring for her venture capital firm, Serena Ventures.

Two weeks later, Rapaport got the request for a next-day phone meeting with Williams. “She was super stealth about her investments. I found next to nothing in my research,” she says. “I stayed up all night watching Serena’s HBO documentary series [Being Serena] to prepare.” After an introductory conversation, in which she learned about Williams’s goal—“using her platform not just to make money but to make a difference; that really spoke to me,” Rapaport says—Williams asked to meet.

Rapaport was already wowed by Williams’s “incredible public persona,” but after their phone call, the drive to work with her was even deeper. Coming from “male-dominated
industries,” Rapaport says, “I became drawn to her mission of building a venture platform as a tool to address larger issues of equal opportunity.” Williams wanted a conscious bias for women and people of color in the portfolio while also evaluating every opportunity. So Rapaport’s elevator pitch focused on inclusively recognizing talent. “Whether it’s age, race, or gender, people are not always open-minded that anyone can be successful—but Serena is.” Rapaport adds, “When you interview, make sure you are interviewing [your interviewer] too. I like to ask, ‘What does success look like for you, and how do I help build it?’ I want to see if I fit into that vision.”

Williams asked Rapaport to visit her Bay Area home one Sunday in the fall of 2018 and to bring three ideas. “I went crazy. I prepared four opportunities and put about 50 more in an appendix,” she says. Having seen on Instagram that Williams loves “taco Sundays,” Rapaport brought snacks from Tacobar in San Francisco. The two ended up going through the entire appendix. “I think that personal touch, coupled with outside-the-box thinking and attention to detail, truly helped me get the job,” Rapaport says of her taco move.

Many of Williams’s existing investments had been just really compelling companies in the early stages. Rapaport wanted a more balanced fund with long-term vision. “I had a strong portfolio-management background but wanted the opportunity to be more creative,” she says. “Serena’s strength is finding the right founders and believing in the product.” Rapaport says it’s been a great partnership so far. Growth is a goal, but also, she says, it’s to “bring more portfolio companies together and have them work together, whether it’s comarketing or using their technologies to build on one another.”

This story appears in the Summer 2020 issue of Marie Claire.

Related Story
How to Get VC Money for Your Company
Jenna Birch Jenna is  a freelance journalist, focusing on topics like health, wellness, dating, relationships, beauty, and lifestyle.
This content is created and maintained by a third party, and imported onto this page to help users provide their email addresses. You may be able to find more information about this and similar content at piano.io
Advertisement - Continue Reading Below
More From Money & Career
The Moms Who Had to Postpone a Travel Gap Year
Couples + Money
Women Marry Their Glass Ceilings
Advertisement - Continue Reading Below
These Women Are Making Space Vacations a Reality
The Women Making WFH Happen
Building a Business That's Also a Safe Space
The Unemployed Couple Squatting in Their Apartment
Couples + Money
Today Marks Black Women’s Equal Pay Day
Can Vanessa Pappas Save TikTok?
The Blogger Couple Who Made $20K Mid-Pandemic
Couples + Money
A New, Free Resource Celebrating Women in STEM