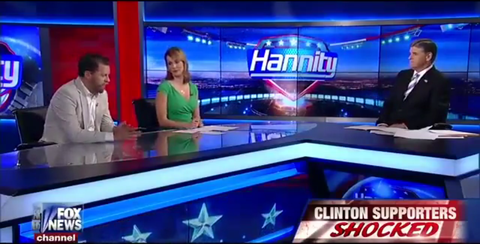 If you bring up the gender pay gap, things are bound to get heated—but on Fox News last night, things got ridiculous.

McInnes went on to say the pay gap is a good thing. "This is sort of God's way—this is nature's way—of saying women should be at home with the kids," he asserted. "They're happier there."

Are you as speechless as we are? We're literally sitting here slack-jawed because WHAT DO YOU EVEN SAY IN THE FACE OF SUCH STUPIDITY.

Holder thankfully channeled all of us and called the comments "deplorable," even asking Hannity to intervene on behalf of his viewers (which he, disappointingly but not surprisingly, did not). She admirably held her own, defending herself and pointing out that she's perfectly happy working and being unmarried. But McInnes kept going. "You're making a mistake," he yelled. "You would be much happier at home with a husband and children."

If you need a little end-of-the-week rage, watch the clip below.

This content is imported from YouTube. You may be able to find the same content in another format, or you may be able to find more information, at their web site.
This content is created and maintained by a third party, and imported onto this page to help users provide their email addresses. You may be able to find more information about this and similar content at piano.io
Advertisement - Continue Reading Below
More From Money & Career
Ace of Spades Is This Summer's Must-Read YA Novel
The Sacred Boom
Advertisement - Continue Reading Below
How to Afford Your Post-Pandemic Getaway
Katrina Lake Is Still a Boss
So You Want a Postnup
Renee Montgomery on Becoming Co-Owner of the Dream
5 Financial Lessons the Pandemic Taught Us
Yes, You Can Afford to Live Alone. Here's How
When WFH Becomes a Never-Ending Nightmare
How to Nail a Zoom Interview