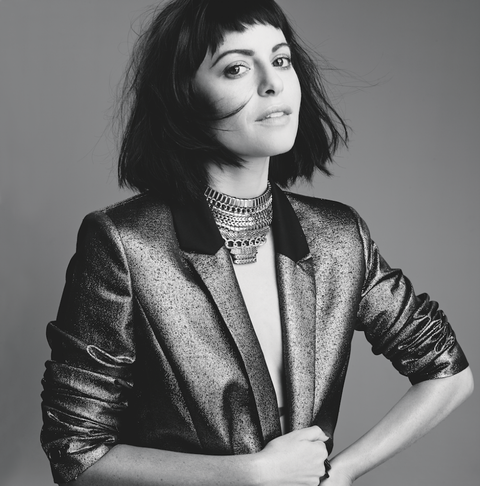 A lot has changed since I wrote #GIRLBOSS two years ago. We made record-breaking revenues. Nasty Gal grew so fast it became the Tower of Babel. We went through layoffs for the first time.

I turned 30. Then I turned 31. We opened two brick-and-mortar (#brickandmurder) stores in Los Angeles. My hair is long! I'm an adult with braces! Most important, I got married.

About those layoffs...we started to feel the hard times only after my book went to press. One hundred million in revenue is a lot of money—but companies much larger have gone extinct.

The concept of success is really weird. Is success building a beloved brand and business? Or is it how you handle yourself when it gets hard? Is success being in the right place at the right time—with the right voice, skill set, team, and drive to cobble it all together? Or is success figuring out how to tame the behemoth once it sprouts legs and sharp teeth?

They say that when you have a kid, it feels like your heart is outside of your body—you can't imagine sending her off to school with the threat that she might get hit by a car or bullied by some asshole. But you have to, because that's what growing up is all about. That's how I feel about Nasty Gal. My whole future is in this brand—but at the end of the day, I can only give it a kiss on the head and a PB&J while standing at the front door. It's still not fully baked. Its success depends on the resilience, fortitude, and ingenuity of the team more than any one skill that I possess.

"The older I get, the less confident I become."

The older I get, the less confident I become. There's simply more to lose. It's really weird to be in your 20s and have a company that's valued at hundreds of millions of dollars, implying to the outside world that I'm "worth" a lot of money. But nearly everything I've earned is locked up in this beautiful, inspiring, evolving business I gave birth to nearly 10 years ago.

At some point along the way, I realized that the people who were there at the beginning may have busted their asses and been super-loyal, but for some, that loyalty was to a version of Nasty Gal as it was then; not necessarily what it promises to be in the future. Sometimes people want to drag you into the past, are unwilling to change, and stand in judgment of the decisions you make when they have even less information than you do.

"I inherited the CEO title by nature of having founded the company. But I've realized that I am best at leading the Nasty Gal customer."

I inherited the CEO title by nature of having founded the company. But I've realized that I am best at leading the Nasty Gal customer. My strength has always been in talking to her. In January, I appointed a new CEO (Sheree Waterson, formerly of Lululemon), a really amazing woman who wakes up every day to lead and inspire our team. Success is about playing to your strengths.

So what have I learned? What's in the future? Consider me half- baked. Just peeling back another layer of the onion every day. As I wrote in my book: You shouldn't idolize anyone. And I'm telling you again, don't idolize me. I don't know shit. Neither do your parents. But if I can pull this off, so can you. Take that and run with it.

Excerpted from the paperback edition of #GIRLBOSS by Sophia Amoruso (on sale September 29, 2015) in agreement with Portfolio, an imprint of Penguin Publishing Group, a division of Penguin Random House LLC. Copyright © Sophia Amoruso, 2015.

This article appears in the September issue of Marie Claire, on newsstands August 18.

This content is created and maintained by a third party, and imported onto this page to help users provide their email addresses. You may be able to find more information about this and similar content at piano.io
Advertisement - Continue Reading Below
More From Money & Career
Renee Montgomery on Becoming Co-Owner of the Dream
5 Financial Lessons the Pandemic Taught Us
Advertisement - Continue Reading Below
Yes, You Can Afford to Live Alone. Here's How
When WFH Becomes a Never-Ending Nightmare
How to Nail a Zoom Interview
VP Harris Chats With NASA Astronauts—in Space
Sallie Krawcheck: What Equal Pay Day Gets Wrong
Is Nextdoor Curing Loneliness?
Five Short Docu Films You Need To Watch
#2MillionMentorMinutes Wants to Help Women