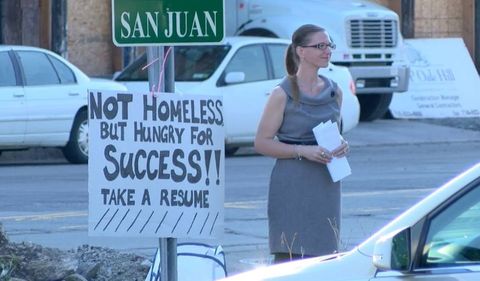 Carrie Kemeling isn't a panhandler, but that didn't stop her from holding a sign on an exit ramp in Buffalo, New York. WKBW-TV reports that she's been standing in business clothes and heels all day with a sign that reads, "Not homeless, but hungry for success! Take a resume." She's after a job, not your spare change.

Kemeling had a job at a local jeweler for three years, but quit on Sunday after being passed over for a promotion. (Her former boss told The Buffalo News that she didn't have the experience to become an assistant manager, and that he was shocked she quit so abruptly.) She's now looking for a job in sales management, and things are looking up so far.

She came up with the idea after submitting her resume to many companies and not hearing anything. "So now I have the time to stand here and actually put myself out there," she told The Buffalo News. "If I'm going to give my résumé to someone, I want to give it to someone who wants it." And so far, she says more than a dozen companies have contacted her about open positions.

Interested in hiring her? Check out her resume, via WIVB-TV. And if not, she's still here for some much-needed career inspiration. "I hope I'm inspiring other people to not just sit down and take what's coming to you, but actually go after what you want or what you believe you deserve," she told WKBW-TV.

This content is created and maintained by a third party, and imported onto this page to help users provide their email addresses. You may be able to find more information about this and similar content at piano.io
Advertisement - Continue Reading Below
More From Money & Career
#2MillionMentorMinutes Wants to Help Women
God-is Rivera on Tweeting Inclusion
Advertisement - Continue Reading Below
The Founder Who Got Meghan Markle to Invest
Event Planners' New Plans
A Day in the Life of the Super Bowl Referee
Created for From Marie Claire for Created by Marie Claire for
Activia 2017
Meet the Woman Leading the Super Bowl LV Flyover
Marcella Nunez-Smith Is Tackling COVID Equitably
140,000 Jobs Were Lost In December—All Women's
Allison Statter Is More than Kim Kardashian’s BFF
Questions to Ask During a Job Interview