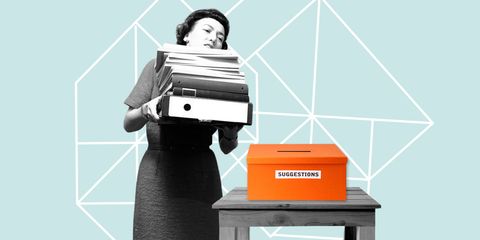 Both Kate Moss (in the December 2012 issue of Vanity Fair) and the Dowager Countess of Grantham (on season five of Downton Abbey) have said "Never complain, never explain," which, in any other case, would be more than enough reason to quit both immediately.

But as much as I believe in the life-advice-giving abilities of supermodels and fictional aristocrats who have a bon mot for every time a family member gets caught fraternizing with the help, I believe in science more. (My AP Chem score does not reflect the previous statement, but I feel this strongly.)

Here, we take a look at the cold, hard facts to inform our final decision next time the age-old question arises: Do I b*tch about it or keep it to myself? The findings may surprise you.

It can help you make friends

How many times have you been queuing somewhere and the girl in front of you turns around like "Ughhhhhhh, isn't this taking forever? It's definitely taking forever."

"There's no doubt in my mind that complaining can serve some very beneficial functions," said Robin Kowalski, a Clemson University psychology professor, in New York Magazine. "For one, it's a great icebreaker." Same goes with the friends you already have—you're lying if you say you don't spend at least some catching-up time venting about all your *other* friends/mutual acquaintances.

In a well-known 1989 study, psychologists Mihaly Csikszentmihalyi and Judith LeFevre found that, even though people at work often wished they were somewhere else, like Dismaland, they reported feeling calmer in their offices than elsewhere. The scientists called this "the paradox of work": "Many people are happier complaining about jobs than they are luxuriating in too much leisure."

Please do not take this as permission to post more Facebook rants (unless they're funny). Venting, especially writing, does help you reach catharsis, an assertion James Pennebaker, a social psychologist at the University of Texas, made after he conducted research involving survivors of traumatic events. By putting their feelings down on paper, his subjects experienced improvements in their mental and physical well-being. Conversely, suppressing thoughts and feelings is associated with long-term stress and health problems.

Most likely because you're confident that you speaking up = you getting what you want.

It makes you sad

This Facebook-centric study introduces an ouroburos of bad vibes. Negative people are more likely to make negative statements on social media. Wah-wah FB posts don't get likes, lowering the poster's self-esteem even further. Weeping and teeth-gnashing all around.

Trevor Blake, entrepreneur and author of Three Simple Steps: A Map to Success in Business and Life, presents this data in his book. Supposedly, exposure to 30 minutes or more of negativity—including watching Donald Trump on TV—actually peels away neurons in the brain's hippocampus. "That's the part of your brain you need for problem solving," Blake says. "Basically, it turns your brain to mush." Personally, I need to keep all the brain mass I can, thankyouvmuch.

But you could live longer!

Science says curmudgeons live longer, healthier lives than Pollyannas probably because they're more risk-averse and have lower expectations, so pretty much anything going even remotely well comes as a pleasant surprise. Also, given the above, their crotchety-ness might have gotten them a bunch of crotchety friends to do crotchety activities with, which we all know contributes to a nice, strong heart.

So that's what it comes down to: living to a ripe old age surrounded by a bunch of buddies but minus a few IQ points or living to a not-as-ripe old age with that one time Shannon treated you unfairly in second grade still bottled up inside. I think the choice is clear.