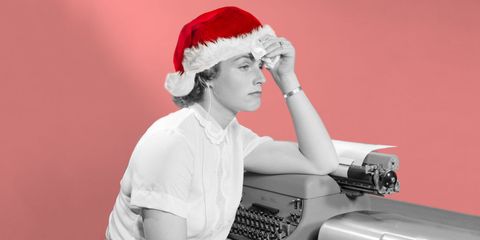 Being in the office between now and December 24 is a bit like the last minute of a math test: You panic, you start squirming around watching everybody else finish up and leave, and you just want to GTFO.

*But* if you 1) find a way to boost your flagging will to work and 2) play your cards right, the holidays don't have to suck. Here, two career experts weigh in on beating EOY lo-mo (AKA "low motivation" for those who didn't read this story and are consequently not my friends).

Go ahead and start a bonfire, but just know that you'll have to make a tighter, more streamlined phoenix rise from the ashes. Jane Buckingham, career expert and host of ABC's Job or No Job, recommends keeping one master list you break up into three-task-long daily lists. The thinking is you'll be like "I finished three things, I'm the mistress of the universe," which might compel you to do even more.

One thing at a time

News flash: That rushy feeling won't go away any faster if you try to juggle 384 things at the same time and do none of them well. "Instead of having five windows open on your computer [editor's note: *releases 2,938 tabs into the void*], focus on one," said Vicki Salemi, career expert for Monster. "Get very basic with your approach to everything: one thing at a time." Also, just as you prioritize your work projects, prioritize your social engagements, which could be contributing to your lo-mo too.

Eyes on the prize (with smaller prizes in between)

You might be living for winter break, but there's still a ways to go yet. Salemi suggests pinning up a photo of the white-sand beach on which you're going to be reclining, scrolling through your Insta and writing down whichever inspirational quote you land on on a Post-It—whatever it takes to remind you of why you're there: so you can make enough money to *not* be there. (Giving yourself a small reward—like googling "golden retriever puppies in party hats"—for crossing to-do items off your list can also help keep morale up.)

Even if you've checked out mentally, you can still make strides socially/professionally by networking the hell out of whatever party you slunk out of work at 5:04 p.m. to attend. Commit to making three new contacts at the event, said Salemi, which should be a breeze considering you can literally walk up to anyone like "Yo, what're you doing for the holidays" and they have to answer. Then, after you hit it off, they'll offer you a job—just in case, you know, the lo-mo turns out to be chronic.