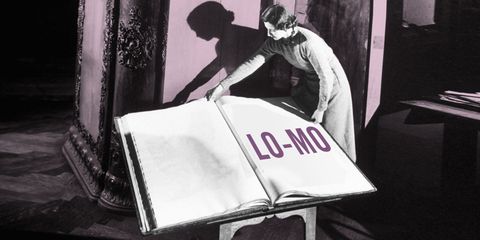 What is the purpose of language if not to communicate one's displeasure? Science might not be able to give a firm answer re: complaining's effect on your health, but here, we've gone ahead and whipped up a few new words with which you can express yourself all the more eloquently at the office.

As in "fear of closing tabs," though in more liberal work environments, you could very well pronounce the acronym. Describes the feeling when you have so many sites open that the little arrows at the ends of your browser appear, but you're too scared to close any of them in case you need them later.

Proper usage: *groaning from under desk* "I HAVE LOOOOOO-MOOOOOOOOO."

A (should be) mandatory pause in the day during which colleagues partake in snack-eating, sleeping, and/or drinking strong German alcohol.

A dull, dry complexion and bloodshot eyes caused by staring at a computer screen all day. Not to be confused with the other "beat face" describing expertly applied, transformative makeup.

Proper usage: "My face is so beat not even a whole bottle of Glossier face mist could revive it."

Keeping your emails unread because you don't have time for that sh*t, plus the higher the number, the closer to feeling popular.

Proper usage: "Sorry I haven't responded to your email...I uh...haven't read it yet. I know it's from three weeks ago—I, um, have a really bad case of inbox avoidance?"

At the end of the day, when you and your coworkers clumsily, pointedly eye one another while packing up slowly because you don't want to be the first one to leave.

Proper usage, internally: "Ugh, Veronica. Just stop lubber-necking and get out of here, damn it."

Chelsea Peng I'm Chelsea Peng, the assistant editor at MarieClaire.com.
Advertisement - Continue Reading Below
More From Money & Career
Birchbox Boot Camp
The Couple With a Hugely Successful Finance Blog
Couples + Money
Advertisement - Continue Reading Below
Dating When You're $120,000 In Debt
How to Lead a Big Meeting With Confidence
The Couple Who Paid Off 21 Credit Cards
Couples + Money
How to Handle Being the Breadwinner
I Started a Company to Pay My Medical Bills
Shan-Lyn Ma Is Here to Save Your Wedding
These Mantras From Powerful Women Are So Inspiring
Created for From Marie Claire for Created by Marie Claire for
Stitch Fix
The Couple Who Paid Off $114K of Debt in Two Years
Couples + Money