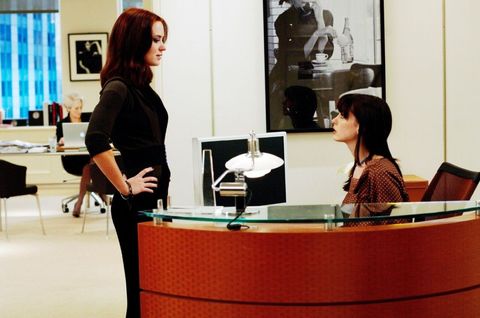 Which is harder: getting your eyeliner wings to both tilt at 50-degree angles or recognizing in yourself the qualities for which you so readily criticize others? [The]

Whether you're the Emily or the Andy in the following fictional work situations, Vicki Salemi, career expert for Monster, is here to judge you—then nicely explain what she would have done had the second assistant usurped the first and gone to Paris in her place. Or something like that.

The setup: Girl who thinks she's too smart for fashion winds up working at fashion magazine under scary boss and screamy-scary under-boss. She doesn't know anything about how this place works, not even how to spell "Gabbana."

The grade: "Mixed bag: B+ and F. It was game over before it began. I give her an F only because nobody should subject themselves to a harsh work environment when there are countless employers who are not toxic seeking hardworking employees. And I give her a B+ for trying to fit in, because you should try to assimilate into your work environment and accelerate your career. However, she should have cut her losses from the very beginning by realizing that this difficult work environment, as well as her boss, were not in sync with her values. You need to assess an employer for how it treat its employees, not its reputation as a 'prestigious' place to work. There's always a better opportunity out there."

The setup: Boy falls for boss's new assistant. Boy loses interest in anything except junk food after girl dumps him despite every pictured interaction they had being disgustingly picturesque.

The grade: "F. It's never a good idea to pursue a work crush while you're current colleagues. I repeat: Never. Even if things go well for a few months and you're discreet, chances are, it will negatively impact your performance at work. Remember when he got so depressed he got transferred to the consolations department? Exactly.

And as if he didn't learn his lesson the first time, you may recall how he made plans with a girl he met on a job interview. Not a good idea. Keep your work and love lives separate."

The setup: Sigourney Weaver tries to pass off Melanie Griffith's idea as her own.

The grade: "B. Tess's career aspirations were clear from the beginning. Upon setting up a meeting with Trask and their businessmen, she held her own by going to extreme lengths and pretending to be her boss. (That said, she gets a B instead of an A for getting romantically involved with Harrison Ford, mixing business with pleasure. Tsk.)

While her efforts could be considered unrealistic, the bottom line is this: She fiercely protected her idea. And when she finally did end up with a much better job, kudos to her for wanting her own secretary to treat her like a colleague and not a superior."

The setup: Old professor dude hits on Reese Witherspoon and is like "I only gave you this internship because I want to bone you." Selma Blair only sees the knee-grabbing part, which is awkward.

The grade: "A+. She did the right thing by ending the conversation and physically exiting the room. Plus, she immediately got the sense for who he was as a person and wasn't afraid to articulate it to him. It was the ultimate power play by Ms. Woods in a situation that could have otherwise left her feeling powerless."

The setup: Mean Judy Greer is supposed to be Jennifer Garner's friend, but she's just as evil as she was when they were 13 and Mark Ruffalo was chubby. Jennifer Garner ain't exactly Rebecca of Sunnybrook Farm either—she's been feeding ideas to a rival publication in the hopes of becoming its editor in chief. WHO WILL OUT-MANEUVER THE OTHER?

The grade: "D. Dealing with a coworker who badmouths and sabotages you is never fun, and sometimes, it may get so toxic you deserve to find a better job elsewhere with more professional colleagues. In particular, Jennifer Garner's character Jenna gets a D because she wasn't an ideal colleague at first. She wasn't likable nor trustworthy, but she redeemed herself when she had that wake-up-call moment. But still, dealing with a coworker who sabotages you is downright awful, and it's even worse when you're the one doing it."

This content is created and maintained by a third party, and imported onto this page to help users provide their email addresses. You may be able to find more information about this and similar content at piano.io
Advertisement - Continue Reading Below
More From Money & Career
Event Planners' New Plans
A Day in the Life of the Super Bowl Referee
Created for From Marie Claire for Created by Marie Claire for
Activia 2017
Advertisement - Continue Reading Below
Meet the Woman Leading the Super Bowl LV Flyover
Marcella Nunez-Smith Is Tackling COVID Equitably
140,000 Jobs Were Lost In December—All Women's
Allison Statter Is More than Kim Kardashian’s BFF
Questions to Ask During a Job Interview
The Woman Behind Thousands of Small Business Loans
Created for From Marie Claire for Created by Marie Claire for
Bank of America
You Can't Pick Produce on Zoom
How to Afford the Freelance Life