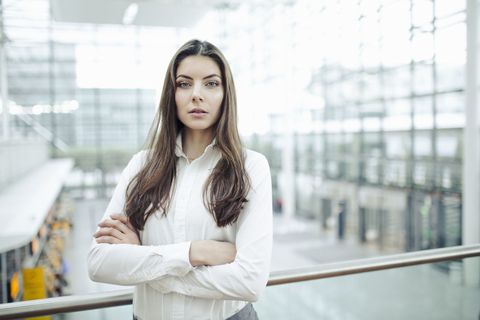 Update, 9/30: Amy Cuddy has issued a lengthy response to claims that her "power pose" study was flawed. You can read the full statement at Science of Us, but here are a few excerpts:

I was surprised by a recent statement that the power pose effect is "not real" and I want to set the record straight on where the science stands. First, it's necessary to make a critical clarification: There are scores of studies examining feedback effects of adopting expansive posture (colloquially known as "power posing") on various outcomes. But I'm seeing the term "power posing effect" being tossed around to refer to many different phenomena. The key finding, the one that I would call "the power posing effect," is simple: adopting expansive postures causes people to feel more powerful. Since my coauthors and I first published our evidence, this effect has been replicated in at least nine published studies and in at least four unpublished studies from nine different labs.

My lab recently conducted a systematic review and statistical analysis of power posing studies. It shows strong and robust evidence that adopting expansive postures does indeed increase feelings of power (manuscript under review). In addition, many studies have shown that adopting expansive postures increases happiness, mood, and other related emotion variables. We did not include those studies in the analysis of the main power posing effect.

I have confidence in the effects of expansive postures on people's feelings of power — and that feeling powerful is a critical psychological variable. As Columbia University Professor Adam Galinsky and colleagues wrote in their 2016 review, a person's "sense of power…produces a range of cognitive, behavioral, and physiological consequences," including improved executive functioning, general optimism, creativity, authenticity, the ability to self-regulate, and performance in various domains, to name a handful.

When I speak about this work now, I talk about new evidence, replications, and non-replications. I highlight which effects I believe to be strongest and most important, and those about which we don't yet know enough. For example, while I am confident about the key power posing effect on feelings of power and the overall evidential value of the literature, I am agnostic about the effects of expansive posture on hormones. The jury is still out. We have conflicting evidence, which is fascinating and means it could go either way. I'm intrigued to see where the new evidence will lead as research continues in social psychology and neuroscience.

Finally, I am concerned that the tenor of discussions like the one that has been unfolding on power posing, and the tendency to discount an entire area of research on the basis of necessary corrections or differences between scientists' assessments, may have a chilling effect on science. In the last six months, three labs have contacted me to let me know that they have conducted high-powered studies on expansive postures or "power posing," but that they are reluctant to submit them because they fear being "targeted" for doing research in this area. Open science must be inclusive.

Original story, 9/27: If you've watched any TED Talk over the past several years, it's likely this one: Amy Cuddy telling you that you should try a "power pose" to help psych you up before that big meeting at work. More than 36 million people have watched the Harvard psychologist's talk, and she has since spoken around the world and written a book about how body language defines who we are. But one of the co-authors of her initial study just poked a major hole in her argument, saying that she now believes the idea of "power posing" is bogus.

According to Science of Us, Dana Carney, one of Cuddy's coauthors on the study, posted on her website Sunday night that she now has serious doubts about power poses after their study failed to be replicated. "As evidence has come in over these past 2+ years, my views have updated to reflect the evidence," she wrote. "As such, I do not believe that 'power pose' effects are real." She wrote that she doesn't study the poses anymore, she doesn't teach about them or even talk about them, and she discourages other academics from studying them.

Carney also wrote that she regrets decisions that she, Cuddy, and co-author Andy Yap made when they worked on their study, which had found that students who "power posed" had higher levels of hormones associated with dominance, lower levels of stress hormones, and were more likely to take a risk. Business Insider notes that in the past, the researchers have been accused of "p-hacking," essentially cherry-picking data that fit a certain hypothesis.

Cuddy has not responded to Carney's claims yet. But experts in the field of body language told Business Insider that anecdotally, power posing does work for some people, but it's just not totally backed up by science yet. The placebo effect is definitely real, and so if you think you're boosting your confidence through a power pose, you might actually experience the effects you want. So go ahead and try standing like Superman before asking for a raise. It can't hurt—but it might not help, either.