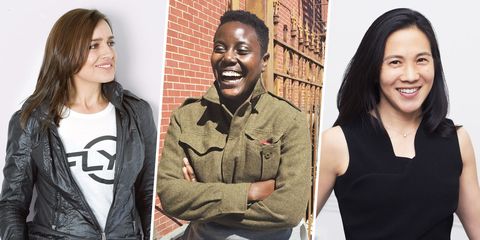 Get to know three incredible women who took risks that paid off in the end. Now, they're making their mark.

If her mom hadn't battled two serious illnesses in two years, Naa-Sakle Akuete might never have founded her beauty company. In 2015, her mother, Eugenia Akuete, took a trip to her native Ghana after winning a two-year fight with colon cancer—only to return to Brooklyn with a serious bout of bacterial meningitis. She spent three days in the hospital, slipping in and out of a coma.

"It was pretty scary," says Naa-Sakle, 30. "For the first time in my life, I said, 'Screw it. I'm not doing the safe thing.'" And so, as Eugenia recovered that spring, Naa-Sakle quit her job at J.P. Morgan, leaving the stable paycheck and the suits behind, and joined forces with her mom to help run Naasakle Ltd., the company Eugenia had started more than 15 years earlier that sells bulk quantities of shea to global corporations, and to launch Eu'Genia Shea, a direct-to-consumer brand.

When it comes to shea, a thick salve with crazy moisturizing properties, the Akuetes are total pros. "I spend 20 minutes every morning shea-ing up," Naa-Sakle says, laughing. "I use it all over my body: my hands, my feet, my arms and legs, my face, even my hair." The formulation she uses isn't the store-bought lotion with a dash of natural plant fat you see on shelves in the U.S. It's the strong stuff—with a high percentage of butter that makes her skin silky and soft. Naa-Sakle got the goods from her mom, who, in the decade prior to her illnesses, had established herself as a force in Ghana's shea butter industry: In addition to founding Naasakle Ltd. in 2000, Eugenia was named president of the Global Shea Alliance in 2012, advising Ghana's then-president on how to take advantage of shea exports.

Since Eugenia had spent much of her daughter's teens and 20s overseas, Naa-Sakle used her mother's permanent return to the States as an excuse to find a way to be close to her every single day. She discussed with her husband the idea of quitting Wall Street to take over her mom's company and start her own. "He said, 'Now's the time. We don't have kids. I have a job. I trust you. This is a good product. Let's see how it goes,'" she says.

The decision to go rogue was quite a departure from Naa-Sakle's background. As the child of immigrants—her parents fled Ghana in the late '70s after a political coup—she was taught about the importance of a good education and a stable job. Naa-Sakle attended Wellesley College, then worked at Lehman Brothers and Barclays, got her MBA at Harvard, and ulti- mately landed at J.P. Morgan. "It was a long time coming, given how careful I've been my entire life," she says. "I'm still kind of amazed I did this. But I'm so happy that I did it." And the businesses are flourishing: Naasakle Ltd.'s revenue has quadrupled, and Eu'Genia Shea recently participated in the Sephora Accelerate beauty boot camp. Best of all, Naa-Sakle's mom is now healthy, and they get to share this new adventure together.

Grit—the perfect storm of passion and practice—allows even the most mediocre of minds to achieve success, and success is attainable for everyone, says Angela Duckworth. The 46-year-old University of Pennsylvania professor and psychologist shot to national prominence when she published Grit: The Power of Passion and Perseverance, which topped best-seller lists last year.

Her book, as well as much of Duckworth's research on the psychology that helps chil- dren thrive, isn't about rebelling, per se. It's about the fruits of focused enthusiasm. But Duckworth's own story began with a bit of professional defiance.

After pursuing a relatively traditional (and impressive) path—Harvard undergraduate degree, master's in neuroscience from Oxford University, a gig at consulting firm McKinsey & Company—Duckworth left the lucrative corpo- rate world to teach seventh-grade math in a New York City public school. "Instead of going to medical school like a good Asian girl, I decided to go teach poor kids," she says. "I grew up with Chinese parents, and the idea of public service was just very foreign. Going to help strangers, who, by the way, were not your race—they just didn't get it. My dad was like, 'I sent you to Harvard for this?'" Duckworth moved in with her now-husband to save on rent, allowing her to quit her job at McKinsey. Over the next five years, she taught math in New York, San Francisco, and Philadelphia.

"I have always done whatever the hell I want. None of us are going to be here in 100 years."

Duckworth felt a change in the way people responded to her job title. McKinsey elicited praise and envy. Seventh-grade math teacher? Not so much. But that didn't sway Duckworth's conviction that she'd made the right choice.

Her work as a teacher inspired her to go back to school to study psychology. "I hadn't figured out how to give [my students] the skills and habits they needed—skills that were not part of the math curriculum, but part of the life curriculum," she explains. At 32, Duckworth began the Ph.D. program at Penn.

Since then, Duckworth's work has received numerous awards, including a MacArthur "genius" Fellowship. She also founded, and now serves as scientific director for, the nonprofit Character Lab, whose mission is to advance the science and practice of character development.

Duckworth's big career takeaway? "I have always done whatever the hell I want," she says. "None of us are going to be here in 100 years." Just go for it.

This time last year, Sarah Robb O'Hagan told the team she had led for four years as president of Equinox Fitness that she was leaving the company to write a book. A few days later, she panicked. "The first three months were totally disorienting," she recalls. The native New Zealander, who now lives in New York, had recently sold her proposal for career guide Extreme You: Step Up. Stand Out. Kick Ass. Repeat., out this month—yet she had never written more than a blog post. She had thousands of thoughts on what it meant to be an "Extremer," but strug- gled to communicate her message.

Robb O'Hagan, 44, has always been a bit daring, but within the safety of a job. She is, after all, an Extremer, which she describes as an executive with a "sense of rebelliousness about their own potential." They're not brainiac Einsteins, skipping grades and exuding suc- cess at a young age. They can be B students with drive and a penchant for following their gut. Extreme You is filled with stories about the ups and downs of Robb O'Hagan's career— most notably her inclination to push back against those who didn't believe in her vision.

"I believe to reach your own potential, you have to break yourself to make yourself."

Yet taking an abrupt break from corporate life just as her star neared its apex? That was Robb O'Hagan's most surprising move. "I needed solitude in my life to think about what I wanted," she explains. It was hard to turn down the many job opportunities that came her way in the months after she left Equinox, but she focused on writing her book and figuring out what, exactly, she wanted out of the next phase of her career. "I definitely had freak-outs, just because I couldn't see a clear path," she says.

Then along came Flywheel Sports. The indoor-cycling company's chairman reached out to Robb O'Hagan last fall. She initially played coy, but as she learned more, she felt it philosophically aligned with Extreme You. This February, the company announced Robb O'Hagan as its CEO.

If she hadn't quit her job at Equinox after she felt like her growth had stagnated, Robb O'Hagan says, she wouldn't have found this new opportunity: "I believe to reach your own potential, you have to break yourself to make yourself."