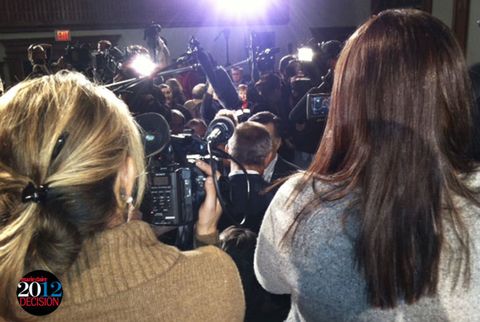 THEY'RE KNOWN AS "EMBEDS" — the political reporters who follow (and tweet and blog) the presidential candidates' every last move, crisscross the country, live out of suitcases, and rarely get home for months at a time. Historically, young men have held these coveted jobs, made famous by the 1973 book The Boys on the Bus. But on the trail in 2012, there are more female embeds than ever—most in their 20s and early 30s. Among the TV networks alone, Fox News, ABC, and CBS have more women on the ground than men, while CNN and NBC have an equal number of male and female embeds.

So what's it like to spend your every waking minute with those vying to be leader of the free world? These reporters slowed down long enough to give us the scoop on one of the most exciting, grueling jobs of the moment.

Professional coup: The best moments are always when you break news—no question. Early on, I found out that Mitt Romney had opened a headquarters office in Iowa—essentially in the dark of night—when it was still unclear if he was going to make a play for that state, which he had painfully lost in 2008. The more I dug, the more I was able to reveal the campaign's strategy of fanning out a major ground game in Iowa, which no one had really reported on yet. It was a huge get.

Most stressful moment: I was shooting a last-minute interview with Romney on his bus, and as I was rushing to feed the footage back to CBS, I accidentally stepped on his iPad! Knowing that he does everything on it, from writing speeches to reading Scripture to playing Angry Birds, my heart dropped. He was actually very gracious. "Sarah?" he said. "Your footprint is on my iPad." I wanted to hit my personal delete button.

Insider gossip: Romney gushes about his wife all the time, calling her "my sweetheart" and reminiscing about how they met when she was in second grade and he was in fourth. She reads over his shoulder on plane rides, bakes Welsh cookies for staff, and does laundry with him at hotels.

On staying healthy (or not): I get a fantastic 15-minute workout closing my suitcase every morning.

What I've learned: Always be present. It might be easy to go on autopilot when you've heard the same speech a hundred times, haven't slept in months, or feel like there's no real news that may possibly come out of an event. Nevertheless, you are there for the viewers. They can't be there, but you can. So you have to be fully present in order to serve them best. And never underestimate the value of even the smallest morsels of news you might catch from being on the ground—there's always something below the surface.

Professional coup: Early in the campaign, I wrote an analysis of Michele Bachmann's speeches that showed the Minnesota congresswoman occasionally having difficulties with the facts—like saying there were 59,000 illegal immigrants who had come into the U.S. from countries that were state sponsors of terror. The real number: 663. That article kicked off a series of other journalists' fact-checks of Bachmann speeches.

Most memorable moment: I asked Newt Gingrich a question about his fundraising that he did not like, and he told me, in front of a bank of TV cameras, to "go home and think about why you would even ask that today." That was the day I gained the most Twitter followers in my career.

Life (and love) on the trail: I'm not going to lie—it's tough. I've been married for five years. It's vital to be with someone who respects your ambitions. And, while I am by no means perfect at this, it's important to remember that your partner is at home dealing with the bills and the cats and making sure the house doesn't fall apart, so you need to make time to listen to what's going on in his life.

What I've learned: Be assertive, but learn from your colleagues who have been doing this a lot longer than you have. It's not always the loudest voice in the room or on the bus who knows the most.

The daily grind: Before the Iowa caucuses, I lived in a hotel in Des Moines for just over five months and only went back to my home in Maryland twice—once because I got stuck at the airport for weather and missed my connection.

Professional coup: In January, I was the first to report that the chairman of the Iowa Republican Party was going to resign. Also, doing my very first live shot on MSNBC was a big deal for me. Having graduated college only two short years ago, I never would have dreamed that I would already be reporting on a cable news channel!

Insider gossip: Newt Gingrich loves McDonald's and Diet Coke, takes his coffee black, has "Dancing Queen" as his ringtone, and, despite being 68 years old, can get barely any sleep and still function on the campaign trail.

Life (and love) on the trail: With the craziness of the campaign, the last thing you want is someone to complain about how much you are working—as if you don't have enough stress already! Sometimes you get lucky, though, like I have been: The guy I'm dating drove four hours to come and see me on the campaign trail for only a few hours. It was really sweet.

What I've learned: It can sometimes be tough out there trying to compete for position with large cameramen in press scrums, but you just can't let people intimidate you or push you around.

The daily grind: I wake up in a different city every morning, often not knowing where I'll be next, carrying more than 40 pounds of equipment from stop to stop. At night, I'm still filing notes and video back to headquarters. Once, I got two hours of sleep in a 36-hour span. My idea of a day off is sleeping more than six hours.

Professional coup: The night of the South Carolina primary, I was the first to get winner Newt Gingrich on camera. I powered up my LiveU backpack, which transmits live video via wireless cards, and waited by the elevator I knew he would need to take to his victory party. As soon as the doors opened, the control room took my camera live, which was exhilarating, given how much I was being pushed and shoved by crowds and security.

Life (and love) on the trail: I'm getting married in June, and I've been fortunate enough to have my fiancé, Trevor, and my parents pick up the wedding planning. Trevor took his parents, who live in western Massachusetts, to see mine in Seattle and visit our venue. He also finished making the invitations, interviewed DJs, and found our officiant.

On staying healthy (or not): I don't usually eat fries, but fast food is a regular staple on the trail. I bought my wedding dress one size down, and I packed a measuring tape in my suitcase to hit my marks, but it looks like I need to log more time at the gym.

What I've learned: Four years ago, when I was covering Mike Huckabee, all the other full-time embeds were men. This time around, all the network embeds following Gingrich are women. It's been rewarding to travel with other female journalists who show me that, in a world of trade-offs, it's possible to have the life you wish for.