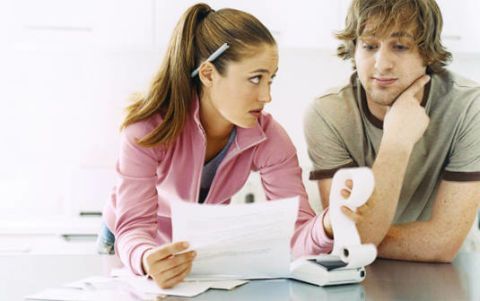 "I just want you to be happy and not have to struggle," her mother told her.

The words rang in Farnoosh Torabi's head. She had just announced her engagement to her longtime boyfriend, a software engineer named Tim. Her mother's response? Well, it was a nice way of saying, "He doesn't make enough money to support you."

But the actual struggle was that Torabi, a writer and financial columnist, would ultimately out-earn her husband — by a long shot. She and her husband wrestled over how financial decisions got made, and she worried how her status as the primary earner would affect the dynamics of their relationship. Would she emasculate her husband in the process?

As she makes clear in her new book, When She Makes More: 10 Rules for Breadwinning Women, she's hardly an anomaly. The percentage of breadwinning women has been growing for decades: Today, 24 percent of wives make more money than their husbands, and women under 30 out-earn their male counterparts in nearly every major city in America. Even so, our attitudes about women and money remain outdated. According to a Pew survey, 28 percent of Americans believe that it is "generally better for a marriage if the husband earns more than his wife."

Torabi says her book is intended for single women whose success may intimidate potential suitors. How can they reconcile the caveman-like brain — that still needs to provide — with changing economics? "The problem is not that women are doing well and making a lot of money — that's a great thing," she told us. "The problem is the outdated expectations and ideas that we have around money and male-female relationships."

You say that breadwinning women are less likely to get married and are more likely to get divorced. How can I avoid wanting to throw myself off a bridge reading that?

You still have the ability to lead a fulfilling life as the female breadwinner — it's just a matter of recalibrating those expectations and relearning what we've been taught about men, women, and money. I, for one, am in it to win it. My relationship isn't perfect (Whose is?), but we're finding ways to reconcile some of our challenges stemming from our income disparity. We communicate about money a lot — something couples don't do often enough, even when both individuals make the same amount.

Tell us how your breadwinner status played out in your own relationship.

Initially we struggled. For example, when we began planning our wedding (which we paid for ourselves), I took the reins in securing vendors as many eager brides-to-be do, but in our situation my dominance had far more to do with our income disparity. As the breadwinner I felt like this was mainly my responsibility. At the same time we were also house shopping and, again, I was the one mainly booking appointments, communicating with the mortgage broker as the "head o' household." But I felt isolated. I was super-stressed and really wanted his input, if for no other reason than to have him share in the blame if something went wrong.

So how'd you solve the problem?

When I brought it up, he didn't run away. He had been keeping quiet, he said, because he trusted me enough to know I wouldn't make any super-irrational choices, but also admitted to feeling uncomfortable at times speaking up because of our income gap. We decided [he] would take over certain portions of the wedding planning. As for house hunting, we based our price range on what we could both individually afford — not just what my income allowed. This meant shopping for a smaller home, but this way, in case anything should happen to my business or income, my husband would be able to pay the mortgage on his own.

We spoke a few months back for a piece called the Doormat Dynamo, about ambitious women who play down their accomplishments at home to avoid intimidating men. At the time, you said, "There is a level to which you have to stroke his ego. Let him open the door for you." That struck me as so … retro. If we constantly have to stroke dudes' egos, are they ever going to be comfortable with women being in power?

It's not like there's a formula — if you make 10 percent more, let him open the door for you, if you make 20 percent more, let him pick up the check. [It's] about finding compromises and gestures that make you both feel good. The reason that a lot of these chivalrous gestures fell out of favor is because they came with the association that women were somehow lesser than men and needed special protection and consideration. But if you're out-earning your husband, that's clearly not the case. If he likes opening the door for you, and you like having it opened, who cares?

Right. But what if you don't like having the door opened for you? You've talked about how you like to let your husband pay in public, so he can feel like the man, and you cop to the effectiveness of playing the "damsel in distress." By stroking his ego, are we actually just asking women to be less assertive?

By stroking his ego, I'm suggesting that we play to his sensitivities a bit more. That we acknowledge what helps him feel good. I don't encourage this as a constant preoccupation. It's just a once-in-a-while sort of thing. Some have read into this as "bowing to patriarchy." But, oy! Let's relax a little. Just because I let him give me his jacket when it's chilly outside — or let him pick up the tab at dinner — doesn't mean he's my master and I'm his subordinate.

This is making me sort of depressed. Aren't there men out there who can simply be self-assured enough to not need a woman to constantly make him feel like a man in the most traditional sense of the word?

Yes. I don't want to make it seem like the mere presence of a successful, ambitious woman is threatening to all men. Some men — particularly men from the millennial generation — are more aware and accepting of the fact that women don't need men to support them, at least not financially. That said, all men — even the most confident — have egos and can feel insecure from time to time for whatever reason, just like women (Who also have egos!). It's not our job to reassure our partners, but if we're in a committed relationship, we should anticipate these feelings and not believe it's so beneath us to help each other feel better if we can.

You have a section in the book called "It's not about feminism anymore." What does that mean?

My book doesn't aim to be a type of feminist manifesto, as I often see the media brand books written by women for women on the subject of work, money, and relationships are. Talk about pressure! The book is about equipping women with key information, stories, and data that can help them make healthier and smarter choices and lead more fulfilling lives when they bring home the bigger paycheck. Will those be the choices Gloria Steinem would make? I have no idea. What is certain is that our generation of women has to bust out of the roles society has created for us and forge our own paths.

OK, but let's be serious for a second. If you're with a dude who can't get over the fact that you make more, shouldn't you find a more modern dude?

Some men deserve that. But I don't think it should be the rule of thumb. Let's not forget that for some men, being in a relationship with a woman who makes more can be emotionally perplexing and he may not know how to express his feelings at first. This is relatively new territory for men — just as it is for women. It doesn't necessarily mean he loves you less or will never appreciate and support you. It may just mean he needs a little bit of time to adjust and find his groove.

Level the Paying Field for Women

The Difference Between the Equal Pay Act vs Paycheck Fairness Act

This content is created and maintained by a third party, and imported onto this page to help users provide their email addresses. You may be able to find more information about this and similar content at piano.io
Advertisement - Continue Reading Below
More From Money & Career
Not Your Mom's Book Club
Your Unofficial Return-to-Office Plan
Advertisement - Continue Reading Below
The Importance of Coworking Spaces for POC
The Future of Women and Work
Where Did All My Work Friends Go?
What Travel Exec Ruzwana Bashir Wears to Work
How to Get a New Job in a Virtual World
1 Writer, 36 Hours, 100+ Reporters
Ann Curry on Reporting in the Aftermath of 9/11
Sonya Ross Reported From Air Force One on 9/11