I first started listening to Belle and Sebastian in high school. It was years after the release of their most iconic album If You're Feeling Sinister, but such is the lasting pervasiveness of their music. Belle and Sebastian are a band that gets what it means to have a thousand feelings that you don't know what to do with, what it means to be in love, what it means to be confused—they just get it. Their music is timeless and yet catapults you back to the exact feeling you had when you first listened to it. Now, the band is releasing a trilogy of EPs titled How To Solve Our Human Problems? and in celebration lead singer Stuart Murdoch is exclusively sharing his favorite EPs of all time with MarieClaire.com.

The good thing about this EP, in my opinion, was that sometimes it sounded like the band wasn’t trying very hard, therefore they were relaxed, therefore the results were often sublime.

Listen to the full EP here.

The best EP often contains a great pop single (such as "Ballad of the Band"), and then gives a chance for other band members to come to the forefront with beautiful solo efforts (such as "Candles in a Church" and "Ferdinand Magellan").

Listen to more from Felt here.

You Made Me Realise by My Bloody Valentine, 1988

An example that the extended play could be a game changer, a gauntlet thrown down by a band who was ready to change the world, but wanted to show you they were about more than just the crazy A-side.

Listen to more from My Bloody Valentine here.

A classic of early house music in the UK, released as an esoteric and varied EP.

Listen to the full EP here.

Most of my picks are from the '80s, but just sneaking in (from 1991) is this masterful 4-tracker from ace beat group Stereolab.

Listen to more from Stereolab here.

William, It Was Really Nothing by The Smiths, 1984

Throughout their short but brilliant career, The Smiths chucked out non album singles for fun—and the extra tracks were always ESSENTIAL listening.

Listen to more from The Smiths here.

When I stumbled on this EP it felt like it came from outer space, so out of step it was with much of the music of the time. But it has proved itself to be timeless.

An influential Glasgow group, tearing it up on the Creation label when the Gallaghers were still in short trousers.

Listen to more from The Pastels here.

In the early 90s when I was digging all things Godard/Truffaut, the existence of this soundtrack EP was more myth than certainty—but it does live, and breathe!

For my last pick I’ll give honorable mention to four fabulous records that have been called EPs, but I think of them more as mini LPs for some reason. It’s a fine line.

Come On Pilgrim by The Pixies

Belle and Sebastian's How To Solve Our Human Problems? EPs come out December 8, January 19, and February 16 from Matador Records. Stream or purchase their music here. 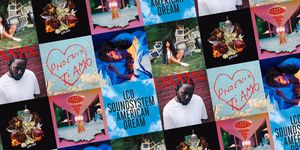 The Best Albums of 2017
Advertisement - Continue Reading Below
More From Celebrity
Blake Lively Channels Vintage Femme Fatale
Dolly Parton, Icon, Started a Viral Meme
Advertisement - Continue Reading Below
Kylie Threw Stormi the Most Elaborate Party
Chrissy and John Had a Post-Grammys Dance Party
Selena Gomez Sent an Emotional Note to Demi Lovato
Nick Jonas Had Food In His Teeth at the Grammys
Why Isn't Beyonce at the 2020 Grammys?
Watch Demi Lovato's Emotional Grammys Performance
Beyoncé's Pre-Grammys Look
Blake and Gwen Were Too Cute at the Grammys