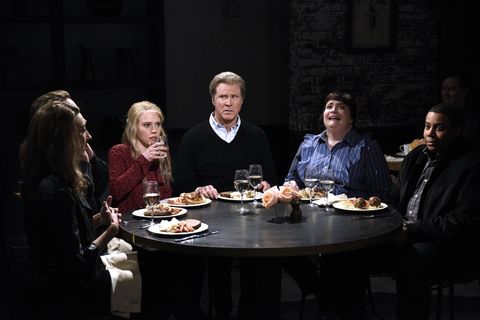 Saturday Night Live has addressed the #MeToo movement once again, this time tackling the controversial and divisive Aziz Ansari allegations.

Earlier this month, Babe.net published a story from an anonymous woman (identified as "Grace" in the article) describing a date with Ansari that she said turned into the worst night of her life. The account drew split reactions, with some criticizing it for what they saw as weakening the #MeToo movement and others noting that it started an important, nuanced conversation about consent and power dynamics in relationships.

Saturday Night Live weighed in not on the scandal itself, but on the awkwardness people feel when trying to discuss it. The sketch highlights how difficult the conversation is and underscores its importance.

The sketch, called "Dinner Discussion," focuses on a group of friends stumbling through a conversation about the allegations. When host Will Ferrell's character tries to change the subject, Kate McKinnon's character points out that the conversation can't be avoided, no matter how uncomfortable it is.

"Honey, the time for talking about the dog is over. We are in a post-Babe.net universe now, and we have to finish what we started," she says.

"Dinner Discussion" wasn't the only sketch of the night addressing #MeToo and Time's Up. In a commercial for a deodorant called "Next," SNL took aim at the anxiety that men feel as they worry that past transgressions will come back to haunt them.

The "Next" digital short features an office manager, a professional comedian, and someone from the entertainment industry walking a red carpet. The range of characters portrayed in the short mirrors the wide reach the #MeToo movement has had, exposing sexual misconduct across all industries.