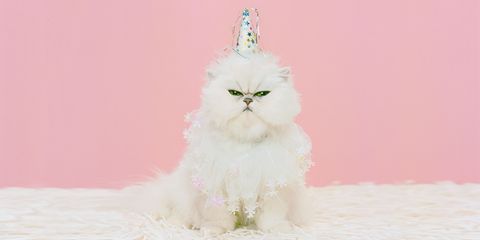 You're a modern woman with a job and a social life. You're single for a variety of reasons ranging from you just dumped someone, someone just dumped you, or you've been single because your last boyfriend was a psycho who stole all of your left shoes. You're at work nine hours a day and like to go out at night and party and date and sometimes sleep with your ex boyfriend, which isn't healthy, but hey, it's your choice...and you want your mittens back.  The point is, you're busy and you aren't always home.

But you are also human and would like companionship and, because you're a woman, nurturing is something that is in your wheelhouse. You don't have the space or time for a dog. You want the warmth of a pet, but don't think you're eccentric enough to rock a shoulder iguana. You need the furriness of an animal with the self sufficiency of, well, you. Your best option?

"Oh cool, you saw one on 'Hoarders' and so it's fair to say that a few outlier women with chemical imbalances get to serve as the poster children for all single women with felines?"

You want a pet for the same reasons everyone does: to care for it, watch it grow, make up gibberish songs about it, and kiss it on the mouth. These are all normal and sweet things. The only downside is that society will think you're sad and some men will sort of write you off as "a lonely cat lady" because of your choice in pet. Seems fair, right? Seems like an okay price to pay for saving the life of an animal by loving it? You should totally be penalized for daring to adopt a pet while being single, right?

Most women have jobs that require them to leave the house. A cat is actually a perfect pet. You get the love and companionship of a creature covered in fur and you don't have to take it for a walk and it can feed itself. Less maintenance. Surely any man can appreciate the practicality of this choice. What I think is insane is to write off an animal just because historically they have a bad rap. We all gave pit bulls a second chance after their bad PR stint; why not give a cat a second look? Pet the thing—if it hisses, then write it off. But don't decide a woman is crazy or pathetic just because she basically doesn't have a dog.

I actually don't even have a cat. I think more than anything, as a comedian, I grow tired of the unoriginality of "crazy cat lady" jokes. It's a hacky joke based on an already played-out stereotype. Have you ever met a lunatic IRL who lives at the edge of town and hoards cats and doesn't change her clothes? Oh cool, you saw one on Hoarders and so it's fair to say that a few outlier women with chemical imbalances get to serve as the poster children for all single women with felines? Makes sense.

And yet, that "crazy cat lady" has become the unfairly assigned mascot for normal women who own cats.

And the intolerance for our pet choices doesn't always stop there. Women are often scrutinized when they have pets that men wouldn't have. We are immediately faulted for having the wrong kind of pet rather than anyone first think, "Wow, she rescued an animal that would have been otherwise killed and gave them a great home, how sweet!" Instead it's: "Ew, she's a crazy cat lady because she has two cats she loves" or "She has a small dog, I bet I'll be annoyed if and when it does bark."

I own a dog. Her name is Blanche and she is my heartbeat. And I've noticed a favorite comment from idiot men (never women) is always along the lines of: "Why are you so into that dog, is it because you can't get a man?" It's so brilliant it makes my brain punch itself. The only way I wouldn't get a man is if the world was filled with men who said shit like that all the time, then I would in fact choose to be alone.

To be labeled pathetic because you enjoy the company of a loving creature who is always down to hang out, sleep, and eat with you, is unfair. When men have dogs, women don't say anything. When men have anything they are obsessed with, women don't equate *that* with loneliness. Steve loves to watch hours of sports every day; Steve isn't faulted for being sad and alone. Stacy has a rescue cat that she feeds every day and likes to post pictures of because she is proud of her cat…"what a psycho."

"I know plenty of single women with cats and none of them are crazy or have ever stopped having sex with a man to go and pet the cat."

Yes, many people are allergic to cats. But allergies aside, women get a bad rap for being "too into" their cats. I know plenty of single women with cats and none of them are crazy or have ever stopped having sex with a man to go and pet the cat. I have seen men, however, stare right past a beautiful woman to get a good look at the game.

Maybe it's the potential threat of attention? "You love that animal more than me." Now of course if you've been married for 10 years and you genuinely feel your wife loves her new poodle more than you, then obviously the issue isn't the poodle.

And as far as making fun of us for our little dogs: Women typically get little dogs because women are smaller than men. We want something we can hold and control on a walk. Of course many women have big dogs, but when you live in a small apartment in West Hollywood, a Bullmastiff, while it might simultaneously impress and scare all the boys, isn't fair to the animal. You pick a pet based on what type of life you lead. You get the pet you can afford. That's why suburbanites with backyards can have yellow labs and sheiks in Dubai can have white tigers, it's about the pet that fits your lifestyle.

Men hate little dogs because they are, typically, loud. I don't know if that's any worse than a huge dog who sheds and slobbers all over everything. Yet somehow, men aren't vilified for their choice of dogs. Women are just supposed to "Get to know Boomer" as he climbs all over your furniture and sheds in your food.