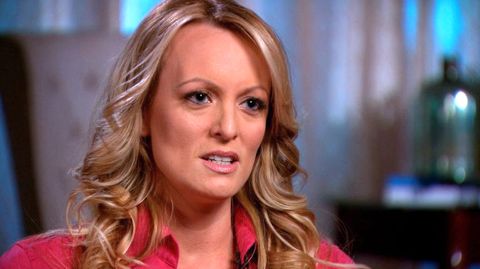 Tonight, Stormy Daniels appeared on 60 Minutes to set the record straight about her alleged affair with Donald Trump. Here, the most shocking moments from her interview:

His pickup line was about himself

It started off—all about him just talking about himself. And he's like—'Have you seen my new magazine?'

And so I was like, "Does this—does this normally work for you?" And he looked very taken—taken back, like, he didn't really understand what I was saying. Like, I was— does, just, you know, talking about yourself normally work? And I was like, "Someone should take that magazine and spank you with it." (LAUGH) And I'll never forget the look on his face.

...I don't think anyone's ever spoken to him like that, especially, you know, a young woman who looked like me. And I said, you know, "Give me that," and I just remember him going, "You wouldn't." "Hand it over." And—so he did, and I was like, "Turn around, drop 'em."

Yes. So he turned around and pulled his pants down a little—you know had underwear on and stuff and I just gave him a couple swats.

He told her he reminded him of his daughter

He was like, "Wow, you—you are special. You remind me of my daughter." You know—he was like, "You're smart and beautiful, and a woman to be reckoned with, and I like you. I like you."

He told her he wanted her to be on 'The Apprentice'

He goes, "Got an idea, honeybunch. Would you ever consider going on and—and being a contestant?" And I laughed and said, "NBC's never gonna let, you know, an adult film star be on." It's, you know, he goes, "No, no," he goes, "That's why I want you. You're gonna shock a lotta people, you're smart and they won't know what to expect."

He told Daniels not to worry about Melania

I asked [about Melania Trump who had just given birth to Baron]. And he brushed it aside, said, "Oh yeah, yeah, you know, don't worry about that. We don't even—we have separate rooms and stuff."

She didn't want to have sex with him

I had it coming for making a bad decision for going to someone's room alone and I just heard the voice in my head, "Well, you put yourself in a bad situation and bad things happen, so you deserve this."

They didn't use a condom

Anderson Cooper:You work in an industry where condom use is an issue. Did he use a condom?

Anderson Cooper: Did you ask him to?

Stormy Daniels: No. I honestly didn't say anything.

I was in a parking lot, going to a fitness class with my infant daughter. Taking, you know, the seat's facing backwards in the backseat, diaper bag, you know, getting all the stuff out. And a guy walked up on me and said to me, "Leave Trump alone. Forget the story." And then he leaned around and looked at my daughter and said, "That's a beautiful little girl. It'd be a shame if something happened to her mom." And then he was gone.

She was trying to protect her reputation and her daughter

I believe, without a shadow of a doubt, in my heart, and some people argue that I don't have one of those, but whatever, that I was doing the right thing. I turned down a large payday multiple times because one, I didn't wanna kiss and tell and be labeled all the things that I'm being labeled now. I didn't wanna take away from the legitimate and legal, I'd like to point out, career that I've worked very hard to establish. And most importantly, I did not want my family and my child exposed to all the things that she's being exposed to right now. Because everything that I was afraid of coming out has come out anyway, and guess what? I don't have a million dollars. You didn't even buy me breakfast.

She won't say if she has texts from Trump

My attorney has recommended that I don't discuss those things.

She thinks Jenna Jameson has a point about keeping quiet

Anderson Cooper: Jenna Jameson, another well-known adult film actress, said recently about you, "The left looks at her as a whore and just uses her to try to discredit the president. The right looks at her like a treacherous rat. It's a lose-lose. Should've kept her trap shut."

Stormy Daniels: I think that she has a lotta wisdom in those words.

He knows I'm telling the truth.

Related Stories
Stormy Daniels: I'm Not a Liar
Tweets About Stormy Daniels' 60 Minutes Interview
This content is created and maintained by a third party, and imported onto this page to help users provide their email addresses. You may be able to find more information about this and similar content at piano.io
Advertisement - Continue Reading Below
More From Celebrity
Meghan's Royal Aides to Testify in Her Court Case
Greta Thunberg Hilariously Trolled Trump—Again
Advertisement - Continue Reading Below
Watch Demi Perform During Biden's Inauguration
Joe Biden Follows Chrissy Teigen on Twitter
J.Lo Wore Head-to-Toe Chanel for the Inauguration
The Queen Sent a Private Message to Joe Biden
Lady Gaga's PDA with Boyfriend Michael Polansky
Twitter Reacts to Lady Gaga at the Inauguration
Lady Gaga Gave a Powerful Inauguration Performance
Lady Gaga Brings the Drama to D.C.