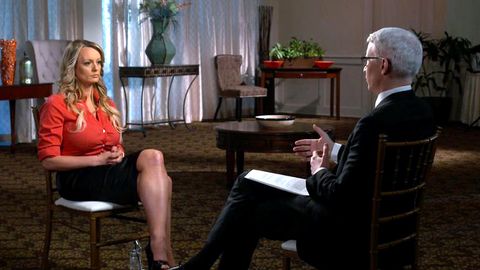 Tonight, Stormy Daniels appeared on 60 Minutes to tell her story of her alleged affair with Donald Trump. Anderson Cooper kicked off the interview asking a question many people have been wondering: Why is Daniels talking about this now?

"Because it was very important to me to be able to defend myself," she tells Cooper. "Because people are just saying whatever they wanted to say about me. I was perfectly fine saying nothing at all, but I'm not okay with being made out to be a liar, or people thinking that I did this for money and people are like, 'Oh, you're an opportunist. You're taking advantage of this.' Yes, I'm getting more job offers now, but tell me one person who would turn down a job offer making more than they've been making, doing the same thing that they've always done."

She is not a victim, however, she clarifies, and she isn't trying to paint herself as one:

"I'm opening myself up for, you know, possible danger and definitely a whole lot of shit."

"They're trying to, like, oh, you know, 'Stormy Daniels comes out #MeToo.' This is not a 'Me Too.' I was not a victim. I've never said I was a victim. I think trying to use me to—to further someone else's agenda, does horrible damage to people who are true victims."

Later in the interview, Daniels also addresses the statements she signed saying that she did not have an affair with Trump. If she knew that to be untrue, if she had, in fact, had an affair with him, why would she sign?

"I felt intimidated and honestly bullied," she says. "And I didn't know what to do. And so I signed it. Even though I had repeatedly expressed that I wouldn't break the agreement, but I was not comfortable lying."

"How do we know you're telling the truth?" Cooper asks.

"'Cause I have no reason to lie," Daniels responds. "I'm opening myself up for, you know, possible danger and definitely a whole lot of shit."

Related Story
Tweets About Stormy Daniels' 60 Minutes Interview
Sally Holmes Editor in Chief Sally is the Editor in Chief of Marie Claire where she oversees coverage of all the things the Marie Claire reader wants to know about, including politics, beauty, fashion, and celebs.
This content is created and maintained by a third party, and imported onto this page to help users provide their email addresses. You may be able to find more information about this and similar content at piano.io
Advertisement - Continue Reading Below
More From Politics
A Debate Coach Grades Final Presidential Debate
A Guide to Celebrity Presidential Endorsements
Advertisement - Continue Reading Below
Twitter Has Thoughts On the Presidential Debate
Can You Vote Online in the 2020 Election?
What's at Stake for Abortion in the 2020 Election
Just 25 Celebrities Doing Their Civic Duty
Donald Trump's Twitter Was Hacked
Kristen Welker Is Moderating the Third Debate
The Swing States We Need to Pay Attention to Now
Your Guide to the 2020 Presidential Debates