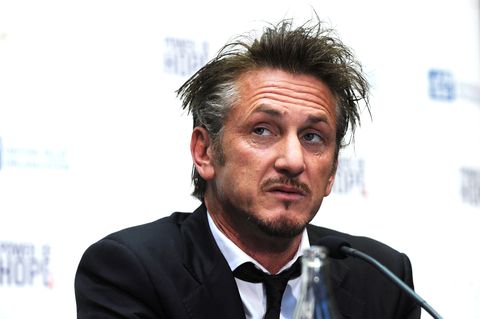 So, Sean Penn penned a #MeToo poem. (Warning: that Penn-penned wordplay is going to be the only good thing about this post.)

Inexplicably included in his debut novel, Bob Honey Who Just Do Stuff, (which, sure... no time to harp on that), the six-page poem is the epilogue, the ending to the book The Huffington Post describes as an "exercise in ass-showing, a 160-page self-own." Perfect.

The blistering review merits its own read (a preview:"We might also call it needlessly cynical to promote such a garbage novel as the second coming of The Crying of Lot 49 just because it was written by a craggy white man with an unearned sense of intellectual superiority and a well-thumbed thesaurus. Nonetheless, Penn was allowed to publish this novel, and Salman Rushdie blurbed it. So here we are."), but back to the heinous poem. Below, an excerpt:

Though warrior women
Bravely walk the walk,
Derivatives of disproportion
Draw heinous hypocrites
To their flock.
[....]
Where did all the laughs go?
Are you out there, Louis C.K.?
Once crucial conversations
Kept us on our toes;
Was it really in our interest
To trample Charlie Rose?
And what’s with this ‘Me Too’?
This infantilizing term of the day...
Is this a toddler’s crusade?
Reducing rape, slut-shaming, and suffrage to reckless child’s play?
A platform for accusation impunity?
Due process has lost its sheen?
But, fuck it, what me worry?
I’m a hero,
To Time Magazine!

Sally Holmes Digital Director Sally is the Digital Director of MarieClaire.com where she oversees coverage of all the things the Marie Claire reader wants to know about, including politics, beauty, fashion, celebs, and Prince Harry's facial hair.
Advertisement - Continue Reading Below
More From Celebrity
Harry Won't Accept Work That Mocks Royal Family
No, Brad and Jen Are Not Getting Married Again
Advertisement - Continue Reading Below
Harry and Meghan Hired Some Fancy New Bodyguards
Critics Review Meghan Markle in 'Elephant' Doc
Meghan and Harry Want to Settle Down In Malibu
Did Ryan Watch Blake in 'Gossip Girl'?
Lizzo Sent Lunch to Frontline Hospital Workers
Kim and Kourtney's Fight Shut Down 'KUWTK' Filming
Dolly Parton Will Read You a Bedtime Story
Prince Harry and Meghan Markle's 53 Cutest Moments