Today's Top Stories
1
Olympian Raven Saunders Gets Another Shot at Life
2
Prince George Looks So Grown-Up in New Portrait
3
Shizu Okusa﻿ Swears by Forest Bathing
4
The Eternal Sunshine of Juno Temple
5
I Used to Imagine Murdering the Men I Dated
Getty Images
This content is imported from {embed-name}. You may be able to find the same content in another format, or you may be able to find more information, at their web site.

Priyanka Chopra, close friend of Meghan Markle's and rumored bridesmaid, just confirmed her attendance to the royal wedding on May 19. According to Us Weekly, who interviewed Chopra at the Cîroc and Variety Empowered Brunch, the 35-year-old Quantico star has "sort of an idea” about what she's going to wear. “But no, I haven’t picked [a dress] out yet.” Same.

Chopra previously referenced her friendship with Markle to the outlet: “I’ve known Meghan for three years and I’m so happy the way the world has responded to her because as long as I’ve known her...she is a relatable young woman of the world today."

She continues, “She’s that girl who thinks out of the box. She has always been an activist. She has always had a strong voice. She’s an ambitious girl of today. I think the world needs strong role models like Meghan. I think, I hope, Meghan will end up being one of those people.”

Chopra and Markle first met at the Elle "Women in Television" dinner back in 2016. “We bonded as actors,” Chopra told People in September. “We just became friends, like two girls would.” She also wrote a sweet post about Meghan for Time 100—an annual list that honors the most influential people of the year.

Tell us all of the wedding secrets, Priyanka! 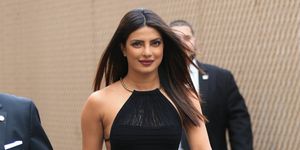