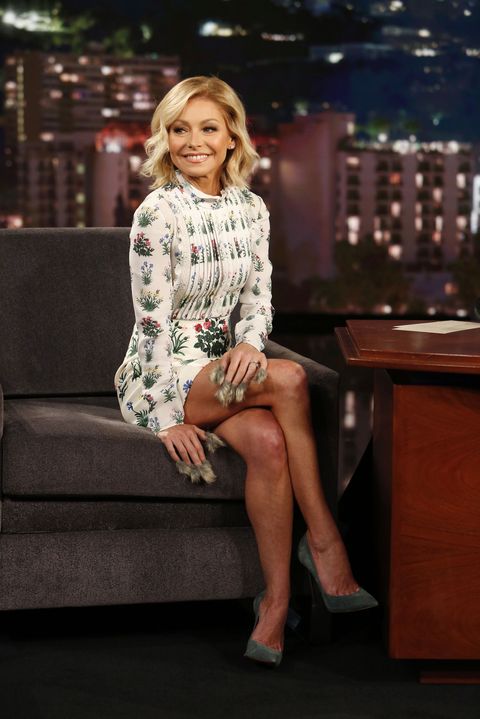 Kelly Ripa has always seemed like an awesome chick to me. She has charisma, a sense of humor with a slight Jersey-girl spike to it, the perfect haircut for her bone structure, and the ability to be spunky and fun at 9 a.m.—every weekday—for the last 15 years. But that perky 9 a.m. version of Kelly Ripa came crashing down last week, when her bosses royally fucked her over.

The details of the timeline are everywhere, but here's the gist: Michael Strahan is leaving Live with Kelly and Michael  to become a co-anchor on Good Morning America—and Ripa was only informed of this huge change *minutes* before going on air. To do this to your star employee of 26 years— she debuted on ABC's All My Children in 1990, when Michael Strahan was a freshman in college—is an embarrassingly public sign of disrespect (which the network has since apologized for).

"Why can't women ever just be pissed, without it seeming like they're coming apart at the seams?"

So she skipped exactly two days of scheduled work to process all of this, which she immediately explained in an email to her staff. But of course, true to sexist tropes, this behavior makes her, as she's been painted in the past week: a diva, crazy, and dramatic. She's having a "total meltdown."

Why can't women ever just be pissed, without it seeming like they're coming apart at the seams?

Close your eyes and picture celebrities who are notoriously angry, the ones who have publicly exploded in fits of rage: Chris Brown. Christian Bale. Mel Gibson. Kanye West. Alec Baldwin called his tween daughter a "rude little pig" on tape—and then won an Emmy months later.

Now try to remember celebrities who have experienced "meltdowns": Mariah Carey, when she stripped on TRL. Lindsay Lohan, crying on Oprah's couch. Britney Spears. Amanda Bynes. You don't have to be a women's studies major to understand that "meltdowns" are just the new, modern spin on "hysteria."

For literally once in her career, Kelly Ripa isn't perky and fun—and she's falling apart? Who writes these narratives? How about this one: She was rightfully angry, so she took some time off to go to the Caribbean to bang her hot husband of 20 years? I think that's an amazing, healthy way of dealing with bad news. I'd like to try it myself.

"You don't have to be a women's studies major to understand that 'meltdowns' are just the new, modern spin on 'hysteria.'"

Katie Couric knows all about being professionally adorable at the crack of dawn, and she gave her pal the subtle feminist salute in an interview yesterday: "I think that's a major decision and you would like to think it's something she is a part of. It's perplexing as to why she wasn't,"Couric told People. "But I think she is a consummate professional. I know she'll show up and give it 100 percent."

Kaitlin Menza Kaitlin Menza is a freelance features writer.
This content is created and maintained by a third party, and imported onto this page to help users provide their email addresses. You may be able to find more information about this and similar content at piano.io
Advertisement - Continue Reading Below
More From Celebrity
Jennifer Lopez and Ben Affleck: Everything We Know
Harry & Oprah's Mental Health Doc Has a Title
Advertisement - Continue Reading Below
Serena Williams Might Miss the Tokyo Olympics
Jennifer and Ben Have "Unreal" Chemistry Together
The Sussexes Marked Archie's Bday in a Lovely Way
Queen's Cousin Accused of Selling Access to Putin
Meghan Wore a Meaningful Necklace for Vax Live
How Celebrities Are Celebrating Mother's Day 2021
Gabrielle and Kaavia's Mother's Day Pic is So Cute
Ben Affleck's Moving Tribute to Jennifer Garner