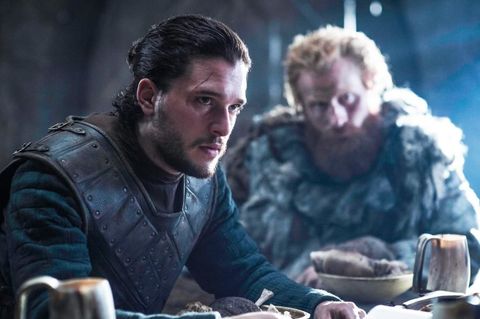 Game of Thrones fans are used to worrying about the safety of each and every character on a weekly basis, but Kit Harington is pretty chill about Jon Snow. Speaking to TheWrap, Harington admitted that he doesn't think his character will die (erm, again, anyway).

"I feel like one of the safest people on Thrones now," he told TheWrap for their August 2016 Down to the Wire Emmy Issue. "Maybe I shouldn't say that. He could die next season, but I felt very safe this season."

And for the record, by "next season," Harington seems to mean Season 7. Even though the rest of interview freely references events from the end of Season 6 and ran this month, Harington framed his answer regarding Jon Snow's personal safety as if it were about last season. "Because if I come back to life in Episode 2, it would be awful storytelling if you kill me in Episode 4. So I felt a bit cocky this season," he continued.

That's tricky, Harington. Is he trying to throw us off (yet again)? Did he catch himself mid-answer and realize how utterly dangerous it is for a Game of Thrones actor to claim their character is "safe" (which is basically like issuing a challenge to the writers at this point)?

But if Jon Snow does die again on Thrones, it's safe to say that Harington would prefer he not be kept around for Melisandre to resurrect again. It turns out spending two episodes playing dead on a table was more daunting than you might expect.

"I was on that flipping table…I thought it would be quite nice just to have a couple of episodes lying down, but it was really frustrating. Everyone's getting on with the job around you, and you just have to be still, and naked, for weeks. I drifted off a few times on that table, and woke up in the middle of Game of Thrones world, which was terrifying."

That sounds terrifying, Kit. But not quite as terrifying as cryptic half-promises that Jon Snow is safe that mostly seem to tempt fate. Excuse me, I'll be looking for wood to knock on the rest of the afternoon.

HBO
Kayleigh Roberts Kayleigh Roberts is the weekend editor at Marie Claire, covering celebrity and entertainment news, from actual royals like Kate Middleton and Meghan Markle to Hollywood royalty, like Katie Holmes and Chrissy Teigen.
This content is created and maintained by a third party, and imported onto this page to help users provide their email addresses. You may be able to find more information about this and similar content at piano.io
Advertisement - Continue Reading Below
More From Celebrity
Beyoncé Stuns in a Mesh Dress With Matching Gloves
Lizzo and Chris Evans Had the Best IG Interaction
Advertisement - Continue Reading Below
Travis Shared PDA-Heavy Bday Tribute to Kourtney
How the Queen Ends Awkwardly-Long Handshakes
The Queen Has a Rule Against Bad Talking Family
The Queen Took a Pic of Philip With Her to Funeral
The Queen's Tolerance Was the Key to Her Marriage
J.Lo "Likes" Shady IG Post After A-Rod Split 👀
Beyoncé Shares Photos of Her White Power Suit
Will & Kate Welcomed Harry Back Into Their Group