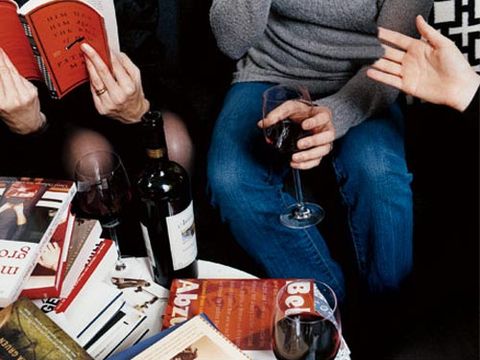 This month, the group looks at how an American spinster ends up at the heart of Middle Eastern politics in Mary Doria Russell's Dreamers of the Day.

THE PLOT: Life hasn't been easy for Agnes Shanklin. First, she loses her brother to World War I. Then, the rest of her family is wiped out during the horrific flu epidemic of 1918. But rather than despair, the 40-year-old virgin takes her inheritance and seeks adventure in Cairo, where she chitchats with Winston Churchill and Lawrence of Arabia about their plans to carve out a new Middle East after the fall of the Ottoman Empire. On top of that, love is in the air.

JIHAN (EDITORIAL ASSISTANT): I didn't like this book. There was just too much suspension of disbelief. I couldn't figure out why any of these luminaries would bother to invite this schoolteacher from Ohio to these history-making events! There was never a convincing reason.

EILEEN (ASSISTANT EDITOR): I know what you're saying - but you just had to go with it. Russell set it up that Agnes's sister had lived in the Middle East and knew some of these guys, so it wasn't completely random that they let her into their circle.

LAUREN (ARTICLES EDITOR): I thought it was cool that the main character was a nobody and that the side characters were famous people. This book was very Passage to India meets Forrest Gump.

YAEL (ASSOCIATE EDITOR): I didn't think Agnes's story was so interesting, but I do think that the history of the Middle East is fascinating. So I liked the novel for that reason - but then why not just pick up a history book or a good biography?

JIHAN: What about the fact that Agnes is spending all this time with Karl, whom she's fallen in love with and who everyone knows is a German spy, yet the Brits still keep telling her about all of their plans for the Middle East? Why would they do that? And did you honestly think she loved him? There was never any real intimacy.

YAEL: Well, guys, she was a 40-year-old virgin - the woman probably would've fallen in love with anybody who'd given her attention! And she knew he didn't love her - she just didn't care. I think Agnes wanted to feel the rush of being with someone. I get that.

EILEEN: And Karl still played a profound role in her life since he was the one who finally pointed out what a controlling bitch her mother had been!

LAUREN: I liked the idea of a 40-year-old having this awakening. When she says, "No one at home knows where I am or what I am doing," that was how I felt when I first came to New York. I could go anywhere, do anything, and I didn't have to answer to anyone. But then Russell relies on a lot of clichés - like the language she uses to describe the picnic?

EILEEN: And why spend so much time describing the food but not more important things, like the Cairo conference? I never fully got what was going on there.

LAUREN: Could you guys really hear Lawrence's giggle that she kept talking about?

YAEL: I could, but that's because I know men who giggle.

NEXT MONTH: The Commoner by John Burnham Schwartz (Vintage)