Pinch me, because this must be a dream: According to The Hollywood Reporter, Insecure star Issa Rae is set to star in American Princess, a romantic comedy directed by Stella Meghi and produced by Paul Feig. If Paul Feig's name is familiar to you, it's because he's pretty much produced or directed some of your favorite comedies of the last decade: A Simple Favor, Bridesmaids, Ghostbusters. So he knows a thing or two about comedy, and Rae knows a thing or two about romance... and comedy.

It's actually a match made in heaven, and I am beside myself. We already got one American princess this year in the form of Meghan Markle, and now we get a second one?!

According to THR, American Princess has Rae playing a woman who moves to London and is "drawn into a world of wealth and high society and falls in love in a very unexpected way." London! Wealth! High Society! In my brain, this movie is already starring Henry Golding (Paul Feig already has him on speed-dial, obv) or Nicholas Hoult as her love interest and Greta Lee or Phoebe Robinson as Rae's American best friend who supports her from across the pond and then comes to console her best friend at the climax of the film? Hollywood, call me! I can do your job if you want me to. Can we get Emma Thompson involved in some way? That's how we can make this the perfect romantic comedy, but she's otherwise occupied, it seems.

Whatever happens, this film seems like the truest dream I could have asked for, and I've never needed a movie to come out so badly. I'm gonna wine down and watch American Princess on repeat. While I'm waiting, Rae stars in The Hate U Give, out now! 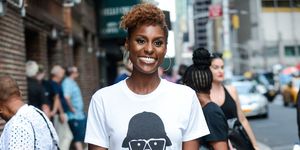 Issa Rae Addresses Lack Of Condoms on 'Insecure'
Issa Rae Hosted a Pre-Emmy Yacht Party This Week
Amanda Mitchell Amanda Mitchell is a writer and podcaster with bylines at Marie Claire, OprahMag, Allure, Byrdie, Stylecaster, Bon Appetit, and more.
This content is created and maintained by a third party, and imported onto this page to help users provide their email addresses. You may be able to find more information about this and similar content at piano.io
Advertisement - Continue Reading Below
More From Celebrity
Meghan Markle Might Not Ever Go Back to the UK
Are Angelina Jolie and The Weeknd Dating?
Advertisement - Continue Reading Below
Kate and Will Ate Burgers With Their Kids
Meghan Markle's Handbag Was a Nod to Diana
Ben Affleck and Jennifer Lopez Made Out in NYC
Lady Gaga Stunned in an Old Hollywood Look
Olivia Rodrigo Looked Jaw-Droppingly Beautiful
Will's "Alleged Bullying" Drove the Sussexes Out
Sam Asghari Opens Up About Britney Documentaries
Prince Harry’s Memoir Is Concerning Royal Insiders