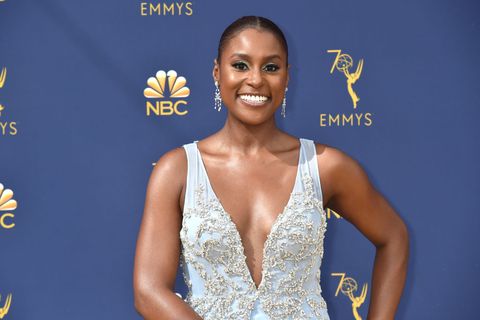 Issa Rae is a visionary writer, performer, and all-around icon, and when she says she wants to do #yachtshit, she means it. Ahead of the Emmys, Rae hosted a pre-Emmy party celebrating the record number of people of color nominated for the awards this year—including her! She’s nominated for Best Lead Actress in a Comedy Series for Insecure. Hence the massive blow-out celebration, featuring her coworkers, fellow writers, and beyond. Because is it really a yacht party if Tiffany Haddish isn’t there? (I have no idea, but if I had a yacht she’d be literally the first person I’d invite.)

To be fair, Issa did warn us that she would be doing yacht shit well into the future—she tweeted about it just last year:

I want to do YACHT shit this summer. For no reason.

But this year, the photos from this year really speak for themselves. Warning: You will get FOMO from these pics:

Tracee Ellis Ross! Secret: When I'm nervous before a meeting or a date, I like to picture Tracee Ellis Ross pep-talking me about what a warrior goddess I am. That's probably normal, right?

And just like that, #yachtshit Part Deux has hit the sea, and back. It truly is a gift to have community within the Hollywood “community”. Check out my IG story to Experience the littyness 🙌🏾🔥🛥

Amanda Seales! I can feel the littyness from here!

Scandal writer Raamla Mohamed! Gotta love that Issa invited the writers who bring these characters we love to life.

Tiffany Haddish is the captain now!

Okay, I need to stop looking at these because they’re making my existence feel pointless. Good luck at the Emmys tonight, everyone!

Cady Drell Culture Editor Cady is the Culture and News Editor for MarieClaire.com, as well as a noted Timothée Chalamet enthusiast.
Advertisement - Continue Reading Below
More From The Emmys 2020
What Everyone Wore to the Emmys After-Parties
Blake Paid Tribute to Leighton During the Emmys
Advertisement - Continue Reading Below
Patricia Arquette Makes a Plea for Trans Rights
The Emmys Were All About the Light Blue Dress
Twitter Is Obsessed with Zendaya's Emmys Dress
Alex Borstein Tells Women to "Step Out of Line'
What Emilia Wore to the Emmys
It's Valentine's Day on the Emmys Red Carpet
Gwendoline Christie Looks Like Jesus at the Emmys
Wait, Is Taylor Swift at the 2019 Emmys?