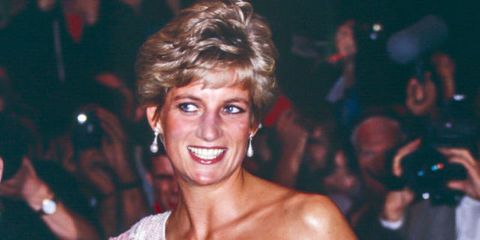 Even though it's been 20 years since her death, Princess Diana's style has proven to be timeless—with even Duchess of Cambridge Kate Middleton channeling similar outfits since being married to Prince William. And now, you could own some of her actual clothing items...IRL.

According to the Telegraph, three dresses that the iconic princess wore and owned are being auctioned off by Kerry Taylor Auctions, with each dedicated to a specific moment of Diana's life. Being that Princess Diana was passionate about philanthropy and giving back, it wasn't uncustomary for her to donate her clothes to friends, charity, second-hand shops and Christie's.

The first dress to be auctioned off is her brown tartan day dress designed by Caroline Charles, which she wore to the Braemar Highland Games on September 4, 1982. It was worn a year after Princess Diana and Prince Charles were married, signifying a happier time in their relationship. Kerry Taylor said, "We see her laughing with the Queen in that dress. It's part of a happy interlude—the calm before the storm." The dress is expected to go for £6,000 to £9,000.

The second piece to be auctioned is a turquoise silk suit created by Catherine Walker, a favorite of Diana's, for her tour in Australia and New Zealand in April 1983. Originally, it was estimated to sell for £6,000, but after being worn, altered, and spilled on it's now is expected to go for £600.

The last dress is a custom velvet gown designed by Bruce Oldfield, which she wore to a dinner for the president at the time Mário Soares of Portugal at the Ajuda Palace in Lisbon in February 1987. It could be sold for up to £70,000.

Fun fact: The first two to be auctioned were actually purchased by a mother and daughter who were thrifting where they heard around the grapevine that the dresses they're interested in belonged to Princess Diana. It just goes to show that you can truly find amazing finds in the most unlikeliest of places!