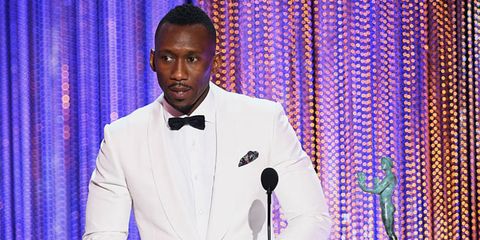 Mahershala Ali made an emotional and stirring speech at the SAG Awards this evening, opening up about his personal history as he called for more tolerance in the wake of Donald Trump's Muslim ban.

Ali, who accepted the Best Supporting Actor award for his performance in Moonlight, was raised Christian by his mother, an ordained minister, before converting to Islam in 2000.

"I think what I've learned from working on Moonlight is we see what happens when we persecute people," Ali began. "They fold into themselves, and what I was so grateful about in having the opportunity to play [his] Juan was playing a gentleman. Who saw a young man folding into himself as the result of the persecution of his community, and taking the opportunity to uplift him, tell him that he mattered, that he was okay, accept him and I hope that we do a better job of that.

"When we get caught up in the minutiae, the details that make us all different, there's two ways of seeing that. You can see the texture of that person, the qualities that make them unique, or you can go to war about it, say, 'That person is different from me, I don't like you, so let's battle.' My mother is an ordained minister, I'm a Muslim. She didn't do backflips when I called her to tell her I converted 17 years ago. But I tell you now, we put things to the side, I'm able to see her, she's able to see me, we love each other, the love has grown. That stuff is minutiae. It's not that important."

Emma Dibdin Contributor Emma Dibdin writes about television, movies, and podcasts, with coverage including opinion essays, news posts, episodic reviews and in-depth interviews with creatives.
This content is created and maintained by a third party, and imported onto this page to help users provide their email addresses. You may be able to find more information about this and similar content at piano.io
Advertisement - Continue Reading Below
More From Celebrity
See a Rare Portrait of Princess Diana's Mother
Kelly Ripa's Husband Left Her a NSFW Comment
Advertisement - Continue Reading Below
Jennifer Lopez on Learning to Love Herself
Diana's Wedding Interview Footage Is Telling
The Queen May Honor Kate Later This Year
Olivia Wilde & Harry Styles Keep It Profesh on Set
Prince Harry on How Tabloid Attacks Changed Him
Watch Orlando and Katy After Her Performance
Kate Middleton Debuted Long, Straight Hair
Prince Harry's Surprise Inauguration Appearance