Today's Top Stories
1
Priyanka Pulls Back the Curtain
2
Could This Be the Last Year of Roe v. Wade?
3
What to Buy From Madewell's Secret Stock Sale
4
Jaclyn Rothenberg Pursues Pantsuits In Every Color
5
Listen to the Best New Love Songs of 2021 (So Far)
Roadside Attractions

Renee Zellweger has basically transformed into another human, and that human is Judy Garland.

Zellweger is playing the late actress in the upcoming biopic, Judy, and the first trailer is finally here to prove that the actresses are doppelgangers and we never even realized it. In the trailer, Zellweger can be heard singing Garland's iconic "Somewhere Over the Rainbow" from The Wizard of Oz and it will give you chills.

The film, which focuses on Garland's five-week run at The Talk of the Town, sees Garland look back on her 30-year career, from her the beginnings of her global fame with The Wizard of Oz to her later struggles.

According to director Rupert Goold, Zellweger was the only choice for the role.

"I felt Renee was uniquely qualified to play Judy," he told ET Online. "First, because she is a great, Oscar-winning dramatic actress. Second, she is a wonderful comedienne. And third, I knew from Chicago that she could sing. I made it clear to Renee that I wasn't looking for an impersonation of Judy Garland's inimitable voice, but what I wanted was for Renee to make the songs her own and this she did to thrilling effect."

Watch the trailer for yourself below: 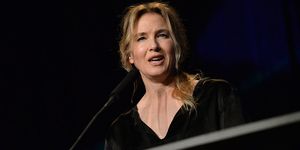 Renée Zellweger Speaks Out About Her Surgery 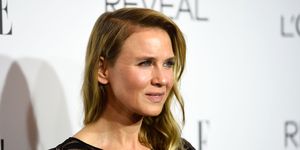 Renée Zellweger on Bridget Jones' Weight Loss
Kayleigh Roberts Contributor Kayleigh Roberts is the weekend editor at Marie Claire, covering celebrity and entertainment news, from actual royals like Kate Middleton and Meghan Markle to Hollywood royalty, like Katie Holmes and Chrissy Teigen.
This content is created and maintained by a third party, and imported onto this page to help users provide their email addresses. You may be able to find more information about this and similar content at piano.io
Advertisement - Continue Reading Below
More From Celebrity
Elizabeth Hurley, 55, Shows Off Toned Abs On Insta
Keira Knightley Won't Do Nude Scenes Filmed by Men
Advertisement - Continue Reading Below
Kourtney Kardashian Is Dating Travis Barker
Priyanka Chopra Jonas Talks Her New Memoir
Priyanka and Nick on Their Quarantine Quality Time
Priyanka Pulls Back the Curtain
Sussexes Will Return to Social Media, Harry Said
A-Rod Celebrated J.Lo's Inauguration Performance
The 6 Most Expensive Royal Wedding Dresses
Inside Kitty Spencer's Stunning £19 Million Home