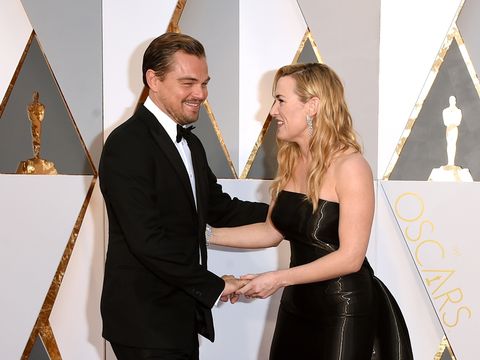 Kate Winslet has discussed the possibility of whether she would ever work with Leonardo DiCaprio again. Spoiler: She's down, especially since her latest film has been giving her "Titanic flashbacks."

"This was much harder than Titanic because we really were at 10,00 feet and it really was -38 degrees Celsius," she told E! News of her new role in The Mountain Between Us. "I definitely had Titanic flashbacks. How could I not? Freezing cold. Me falling into that cold water." 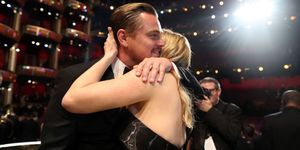 Leo Talking About Kate in \'04 Will Make You Swoon

In the film, Winslet stars alongside Idris Elba as one of two strangers who survives a deadly plane crash on a snow-covered mountain.

"It was definitely reminiscent of certain other challenging, strenuous experiences I had 20 years ago," Winslet added, before saying that she turned to DiCaprio to get some tips for surviving in the cold, after his Oscar-winning performance in The Revenant.

"[Leo and I] did speak before filming and he did sort of say to me, 'Oh my god, you are crazy. It's going to be freezing cold. Do you honestly know what you are sending yourself up for?'"

The actress said she kept DiCaprio in the loop by sending him pictures of her lying in the snow, but added that what she had to do was nothing like his role in The Revenant, where he had to climb inside a horse carcass. After praising his Oscar-winning performance, she was asked if they had plans to work together again.

"At the moment, no," she said. "There's nothing that Leo and I have planned. But as always I would love to work with him again one day but who knows? It might not happen until we're 70."

So there's still hope, but we might have to wait a while until Jack and Rose, take three.

This content is created and maintained by a third party, and imported onto this page to help users provide their email addresses. You may be able to find more information about this and similar content at piano.io
Advertisement - Continue Reading Below
More From Celebrity
Charles Won't Allow Archie to Become a Prince
Royals Had Several Talks About Archie's Skin Color
Advertisement - Continue Reading Below
See Blake Lively's *Impressive* Watermelon Cake
Prince Charles Cant Deal with Harry's Criticisms
Serena Gave Daughter Olympia a Tennis Lesson
Meghan Shared What Helped Her Through 2020
Kylie and Travis Are "Very Close" After Reuniting
Meghan's Book 'The Bench' Tops Best Sellers List
Kaavia Talks to a Bee in an Adorable IG Video
David Harbour on Being Stepdad to Lily Allen's Kid