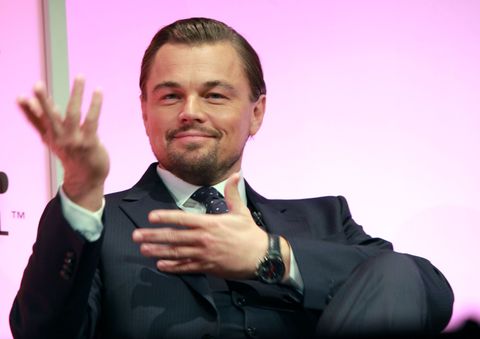 Leonardo DiCaprio, man who keeps getting nominated for Oscars but never wins, just mused at length on his cat-like relationship with death. In an interview with Wired, Leonardo said "if a cat has nine lives, I think I've used a few" [hahaha], then spoke at length about all the times he's almost peaced out to heaven (read: the ghost ship at the end of Titanic).

When He Almost Died Because #EvilSharkProblems

"A great white jumped into my cage when I was diving in South Africa. Half its body was in the cage, and it was snapping at me...The great white took about five or six snaps an arm's length away from my head. The guys there said that has never happened in the 30 years they'd been doing it."

When He Almost Died Due to a Plane Exploding

"Then there was this Delta Airlines flight to Russia. I was in business class, and an engine blew up in front of my eyes. It was right after 'Sully' Sullenberger landed in the Hudson. I was sitting there looking out at the wing, and the entire wing exploded in a fireball." 👀

When He Almost Died During a Freak Skydiving Accident

"It was a tandem dive. We pulled the first chute. That was knotted up. The gentleman I was with cut it free. We did another free fall for like another five, 10 seconds. I didn't even think about the extra chute, so I thought we were just plummeting to our death. He pulled the second, and that was knotted up too. He just kept shaking it and shaking it in midair, as all my friends were, you know, what felt like half a mile above me, and I'm plummeting toward earth."

When He Almost Froze To Death During The Revenant

"The hardest thing for me was getting in and out of frozen rivers. Because I had elk skin on and a bear fur that weighed about 100 pounds when it got wet. And every day it was a challenge not to get hypothermia."

In conclusion, The Grim Reaper is stalking Leonardo DiCaprio, but he's just like:

Mehera Bonner Contributor Mehera Bonner is a news writer who focuses on celebrities and royals.
This content is created and maintained by a third party, and imported onto this page to help users provide their email addresses. You may be able to find more information about this and similar content at piano.io
Advertisement - Continue Reading Below
More From Celebrity
Are Will & Kate Sending a Message to Harry & Meg?
Harry and Meghan Reportedly Have a Four-Book Deal
Advertisement - Continue Reading Below
Naomi Osaka Lit the Olympic Cauldron in Tokyo
John Legend Performed "Imagine" for the Olympics
Simone Biles Is Honored With Her Own GOAT Emoji
Kate Winslet Reveals Her Favorite Red Carpet Look
Margot Robbie Had a Life-Size Cutout of John Cena
Jennifer Lopez and Ben Affleck Are IG Official
Celebs Share Their Emotional Infertility Stories
14 Candid, Unseen Photos of the Royal Family