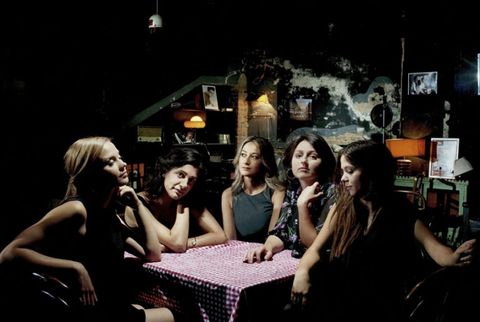 The casting session appeared mundane: Along with about 100 other hopefuls, Dzana Pinjo, a 29-year-old Bosnian actress, read from a script about the Bosnian war. Then things got personal. Pinjo was interviewed privately about her own experiences during the conflict, which began when she was 10, in 1992. Forced to leave school, she hid in her family's apartment building for weeks at a time over the next four years. The questions "felt intimate," she says. "I was a bit uncomfortable." But her openness paid off.

She landed the role — a Bosnian woman in a brutal war camp. And she learned the film was Angelina Jolie's directorial debut.

"It was a shock. I thought, She's coming here? Angelina? Come on!" Pinjo says.

Zana Marjanovic, the film's lead, fled Sarajevo when the war started. Now 28, she assumed the vivid script, which Jolie wrote, was by a Bosnian. When Jolie called her personally, Marjanovic felt a rush of adrenaline. But there was no room to be starstruck on set. Jolie met with everyone, even the actresses with minor roles; they were all soon calling her "Angie."

In preparation for a horrible rape scene, Jelena Jovanova, 27, and Jolie had a heart-to-heart over breakfast. "She said, 'It's going to be tough,'" recalls Jovanova. After several takes, Jolie invited Jovanova to see her performance on a monitor. Other actors gathered around, moved to tears.

Nervous before her first meeting with Jolie, Vanesa Glodjo, 37, wrote up a list of questions. But Jolie asked about Glodjo's own experiences — like dodging Serbian sniper fire as a 17-year-old. "There's a special state of mind in wartime," Glodjo says. "She wanted to capture that."

Jolie gave Alma Terzic, 24, a DVD of video testimonials from women who had lived through the conflict. The stories brought Terzic back to her childhood, when her family spent two years unsure whether or not her soldier father was alive.

For Pinjo, working with Jolie was a lesson both in craft and self-empowerment. "She said, 'This is the story of your people. I trust you,'" recalls the actress. "It's something I will remember all my life."

This content is created and maintained by a third party, and imported onto this page to help users provide their email addresses. You may be able to find more information about this and similar content at piano.io
Advertisement - Continue Reading Below
More From Celebrity
Sam Asghari Opens Up About Britney Documentaries
Prince Harry’s Memoir Is Concerning Royal Insiders
Advertisement - Continue Reading Below
Meghan Markle Wore Some Familiar Earrings in NYC
Harry and Meghan Could Visit England for Christmas
Meghan Markle Looked Gorgeous at Global Citizen
Harry and Meghan Are Taping Their NYC Trip
Keep an Eye on Lady Louise Windsor
Princess Beatrice's Daughter May Get a Royal Title
James Middleton’s Wife Thought He Was a Waiter
Meghan Markle Got a New Nickname