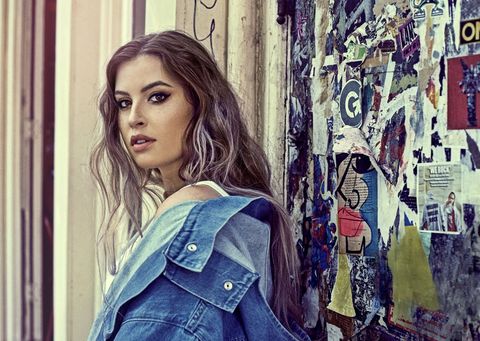 Photo by Guerin Blask. (Hair by Netty Jordan; make-up by Eric Vosburg; and styling by Abi Arcinas and Hanna Isaksson.)

And the L.A.-based 23-year-old singer/songwriter knows a thing or two about playlists: She's dominated plenty of them. (Her first EP, Finding Fletcher, which included the viral hit "Wasted Youth," has been streamed more than 50 million times to date.) Her sound is pretty much a playlist for life—fun and high-energy enough to dance to, but introspective and chill enough to get lost in and vibe out to. Consider it pop music with substance. "There are so many female pop artists who write songs about love that any girl can sing about," Fletcher says. "And while love is beautiful and inspirational, there are so many other things to discuss. I want my music to also be an outlet to channel female empowerment, self-love, self-exploration."

With her second EP arriving this fall, Fletcher is turning from anthems like "Wasted Youth" to thoughtful, reflective songs like "Sharks." ("'Sharks' is a song about the ugliest parts of the music industry," she explains. "It's about being afraid to trust people because you never know who has your best interests at heart but, regardless of the fear, still jumping into it with everything that you have.") So who better to tap for a list of tracks to party away these last dog days of summer? "A good song is one that wraps up the nostalgic feeling—to reflect on the feelings that the season gave you, whether it was full of adventure or romance—into one sweet little package," Fletcher says. Like her own "You Should Talk," which she describes as "an after-the-after-party kind of song." One more thing: "A good end-of-summer song is always the way to go out with a bang."

"Don't Kill My Vibe" by Sigrid:

"Such a badass song. The first time I heard it, I just turned it up, and I was already screaming the lyrics by the end."

"This song has this very stream-of-consciousness, word-vomit type of vibe. It feels really authentic, raw, and natural."

"Say My Name" by Tove Styrke:

"Makes you want to roll down the windows in your car as you drive down the PCH to Malibu."

A version of this article appears in the September 2017 issue of Marie Claire.