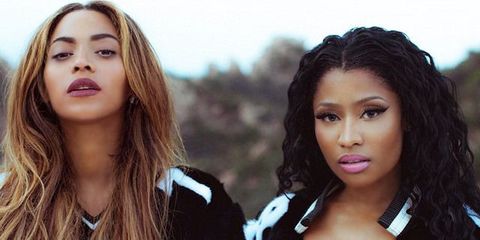 Unless you were living under a rock yesterday, you probably already know that the new music video for Nicki Minaj and Beyoncé's collaboration "Feeling Myself" came out. And for those of you who saw it, you know it was pure visual fun—awesome colors, crazy clothing combos, and cheeseburgers galore. (A formula for success if ever there was one.)

We caught up with the woman behind the fashion—stylist Marni Senofonte, whose worked with everyone from Kim Kardashian to Mary J. Blige—to get the insider deets on EVERYTHING that went down.

This video is serious eye candy. Everything is just so fun and powerful and colorful. What was the idea or concept for the shoot?

"The truth of the matter is, it was really last minute. And it was Beyoncé's idea to go to Coachella and to shoot at Coachella. It was so spur of the moment! But that's B, that's her. She's so spontaneous and it's just part of her craft—if she likes it or she wants it she goes for it. Honestly, there was no real 'treatment' that usually happens. The idea was, you know, 'let's go to Coachella.' It was supposed to feel the way that I hope it does—really good friends, just going and having a good time, and making fun memories. And I scrambled together in two days what we would need and we went over everything, but it was really this idea of, you know, everyone at Coachella looks like a hippie, but I was like, what if the other kind of kids to go Coachella? This is all the clothes that we were wearing. It's pretty much the urban version of Coachella."

"It was a total girlfriend vibe. Like 'You wear this, no you should wear this. Oh no, you look better in that.'"

Was there anything that Nicki or Beyoncé brought to the table in terms of what they wanted to wear or look like?

"You know, some of the clothes were actually B's. A couple of the bathing suits were hers and the rest we kind of just shipped out and had things made. Again, we had two days, so it was just kind of like, what looks good? What do we want to do? B was so cool. She was kind of like my first assistant on the job: 'We should wear this, Oh I have this.' It was awesome. And Nicki–I have to tell you, I was so nervous. Not nervous to work with her, but it's just generally hard to work with somebody on this type of level for the first time. There's often things that they don't want to wear, like, 'oh, I don't want to show my arms,' etc. and because it was so last minute, I wasn't aware of any of that going in. But she was so open to everything! Nicki and I talked after the video, and she was just like 'I can't believe we're just going to shoot this!' But that's the best part about these two, and working with Beyoncé especially—she's so off the cuff and so down for anything. I worked with her on the 7/11 video as well, and each was really...nothing was predetermined. We'd run and grab clothes, change, figure out what we wanted and then refine the idea. That was it."

What was the most memorable moment on set?

"Well, it was so funny, because we did the shoot over the Coachella weekend, and a bunch of press and blogs, they saw Beyoncé and Nicki on the side stage, and they were like 'Oh, Beyoncé was giving Nicki side-eye, and oh, they must be fighting.' And it was just so hilarious, because we were all there together, all having fun, shooting a random video, and nobody put it together. You would think somebody would have—they have the song. But nope. It remained a secret."

You see so many different scenes and shots with very eclectic fashion. Was there anything going in that you were like "we have to do this..."

"I didn't have time to do a mood board. And really, I just wanted to frame it as a bunch of kids from like, Brooklyn and Queens and Manhattan went to Coachella—what would they wear? Beyoncé's from Texas, but her style is really *that*. It's how she dresses when the cameras aren't on. Of course, she doesn't wear fur in the pool [laughs], but the high-waist denim, the crop tops, she was just on it.

There is this Ol' Dirty Bastard hockey shirt that we all really wanted to get in. We were kind of running out of time, but B was like that's a shot I really want to happen, and so she actually went back in after all her shots were done and just made it happen. She can be seen wearing them with Balmain Timberlands. There was also this really cute T-shirt Beyoncé wears that says 'burn ya crown,' and it was just this cute little thing—kind of having a sense of humor about herself."

What about Bey and Nicki? Anything they particularly gravitated to?

"B loved the furs. LOVED them. She was like, we have to figure out how to make these work. Nicki is wearing Chloé and Beyoncé is wearing Oscar de la Renta. And it was so funny: We had to have them uber-ed from Palm Springs to LA, then we sent them back, then we needed to bring them back again. It was wild."

"Well, I loved the furs, too. I really wanted to make happen as well. I think my favorite shot is them in the kiddie pools with the pink furs."

Was there anything anyone was uncomfortable with or didn't like?

"I wouldn't say there was anything anyone didn't want to wear, but Nicki really loves fitted clothing, so it was very different to put her in boxy clothes. There was a boxy fur that was worn open, and I know she wasn't feeling that one as much as the others, but we were like, it looks so good! Beyoncé I think convinced her more than I did [laughs]. You can see it interwined in the cuts, and I think it really works with the video. But yeah, she's not as comfortable in the boxiness of clothes. Which, if I had her body, I'd want everything to be fitted, too."

"It was a total girlfriend vibe. Totally, like 'you wear this, no you should wear this. Oh no, you look better in that.' It was really amazing to see two of the biggest female stars in the world acting in that way. So supportive. You know, Beyoncé is known for being a girl who sings and talks about supporting and it was really a true testament to that. It was honestly just the most fun shoot, it was like a documentary. It really was just them, hanging out. Doing what they would do."

"We were actually still setting up at one point and they just start throwing fries at each other. Thankfully, we got it on film."

Even the burger eating?

"Even the burger eating! We were actually still setting up at one point and they just start throwing fries at each other. Loved it. Thankfully, we got it on film."

View On Instagram
Samantha Leal Senior Web Editor I'm Sam, the senior editor at MarieClaire.com.
This content is created and maintained by a third party, and imported onto this page to help users provide their email addresses. You may be able to find more information about this and similar content at piano.io
Advertisement - Continue Reading Below
More From Celebrity
Ben Affleck Had a Sweet Father's Day Celebration
Selena Talked Being Mocked Over Her Mental Health
Advertisement - Continue Reading Below
Olivia Wilde Was Asked About Harry Styles Romance
What Happens on Katie's Season?
Gigi Shared the Sweetest Photo of Zayn and Khai
Meghan Shared the Cutest Update About Archie
Meghan's Heartfelt Father's Day Gift for Harry
Sophie Turner Shared a Sweet Unseen Pregnancy Snap
The Queen Has a Collection of Dog Toys for Sale
Meghan Revealed the Nod to Diana in 'The Bench'