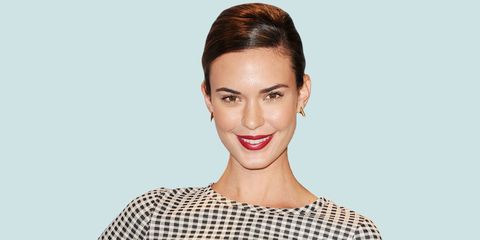 ABC's latest mini-series The Astronaut Wives Club gives new meaning to the phrase "behind every good man is an even greater woman." The show profiles the resilient wives of the first astronauts as they become American royalty and work to maintain the image of their families and husbands. Odette Annable plays Trudy Cooper, the badass feminist leader of the group—a woman who always speaks her mind and impacts the women in truly powerful ways. Odette sat down with us and gave an inside look at the importance of the show and how it's a step in the right direction for women everywhere.

What does the show reveal about the women of the 60s and 70s that people wouldn't expect?

"Well, the thing about it is that these women have been in the shadows for so long. You know the story about these American heroes, but you don't really know what their lives were like back home. NASA always wanted these family men with model marriages. That's what they wanted to present. This story really shares about how the women stood together and worked to have a united front for these men but they have so many other things going on in their lives. They're really the first reality stars of America and having to navigate the press, the pressure at home, having to keep the family alive, and the children all while not knowing if your husband was going to come back is a really terrifying thing. These women were so brave."

You're character Trudy Cooper is extremely outspoken. Would you consider her a feminist?

"The ultimate feminist. She really was this modern thinker. She was way ahead of her time. She believed in women and she believed we should stand up for our goals and our dreams—why should the men have everything and the women not be able to do what they want to do? Not just bake apple pies at home and take care of the family. She really has other dreams and aspirations."

That's amazing. How did her beliefs fit in during a time when women were expected to fit into the Suzy Homemaker mold?

"Whenever she stands up for women's rights the women would sort of laugh it off and say, 'Oh, Trudy. Oh, Trudy.' It was really important to her and it was important that she have her own voice. I love seeing that throughout the show because towards the end you can see the way that her opinions start to make an impact on the women, which I believe is so powerful. I look up to that so much because that's how I am as a woman and that's one of the things that I really related to when I read Trudy's story."

Do you see any other similarities between Trudy's personality and your own?

"Well, she's a firecracker. If you ask my husband [actor Dave Annable] he'll say the same thing about me. Just in the way that she really voiced her opinions—I can really relate to that because I never hold back. She didn't let herself get pigeonholed, and that's how I am. I always say, you know, 'Why not me?'—it's taken me pretty far in this career. You see some of these other people going further and doing different things—certainly men—and as a woman you'd like to think that you can, too. That's what I believe Trudy would think and that's what I think as well."

So many actresses have recently spoken out about gender inequality in the film industry. Do you see the same issues in television?

"Oh, absolutely. I think we've struggled with that for a while and I've been in this business—well, since I was four years old basically. When I turned 19 and I started working on bigger projects, the first thing that I noticed was the wage inequality. I was the lead of The Unborn and my male costar—who was in significantly less scenes than I was—was making way more money! That was the first time I really saw that it's just not equal. We're not there yet."

Do you think The Astronaut Wives Club is a step in the right direction?

"Absolutely. It shines light on the issue that we've had for so long—especially Trudy's story. Trudy had some of the biggest changes and she's always fighting for her rights and I love that about her. These women are the backbone and they carry it all, and that's how it is now. Not to mention, their friendships and the bond these women created. I think it's such a celebration for women in general. I think that's really important and girlfriends are the best. You can't get through life without them."

If the show were to have one message, what would that message be?

"Don't count women out. We're smart. We're efficient. We do it all—and you'll see that in the show."

The Astronaut Wives Club premieres on ABC June 18 at 8/7c.

This content is imported from YouTube. You may be able to find the same content in another format, or you may be able to find more information, at their web site.
Simedar Jackson I'm Simedar, an intern here at MarieClaire.com!
This content is created and maintained by a third party, and imported onto this page to help users provide their email addresses. You may be able to find more information about this and similar content at piano.io
Advertisement - Continue Reading Below
More From Celebrity
Meet Simone Biles's Super Supportive Parents
What Happens on Katie's Season?
Advertisement - Continue Reading Below
Bennifer Recreated Their 2002 PDA Moment
Why Harry's Memoir Release Date Has Upset People
The Royals Are Worried About Prince Harry's Memoir
Gabrielle Union Debuted a New, Short Haircut
J.Lo Made Out With Ben on IG for Her 52nd Birthday
Harry Is Putting the Queen in a Difficult Position
Are Will & Kate Sending a Message to Harry & Meg?
Harry and Meghan Reportedly Have a Four-Book Deal