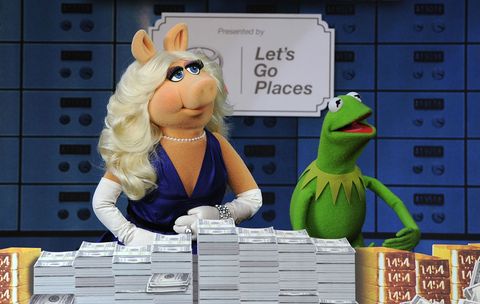 Update, 7/20: We might not have noticed it before now, but Miss Piggy and Rihanna are definitely birds of a feather. They've both got expensive taste, strong dispositions, and they're *not* shy about cashing in an IOU, even if they have to wallop a bitch/Kermit to get it.

In this tears-streaming-down-your-face hilarious video remix by Mylo the Cat, the Gloria Steinem-caliber feminist takes back what's rightfully hers while mouthing lines like "Kamikaze if you think that you gon' knock me off the top/Sh*t, your wife in the backseat of my brand new foreign car." It doesn't get any better than this.

Update, July 2: The video is here and it's graphic, to say the least. It's also something that's been brewing in RiRi's mind for some time. "Ya girl got director skillz!!!" she wrote on her Instagram. "The concept for this piece came to me 8 months ago!!! So you can imagine how anxious I am right now!!!"

While kidnapping and, ahem, "finishing the job," she has two henchmen accomplices including model Sita Abellan. And surprise, surprise, the sucker that didn't pay her what he owed her: Hannibal star Mads Mikkelsen.

Original, June 29: ICYMI: Last night the BET Awards went out with a bang thanks to none other than Rihanna, who dropped the "Bitch Better Have My Money" video teaser that's currently curing us of our Monday blues.

We can already tell that the video, directed by RiRi and Megaforce, is a chills-down-your-spine thriller that's wicked in the best way.

RiRi stars as a ruthless femme fatale/pseudo-collections officer, bedecked in Captain-Jack-Sparrow-meets-John-Galliano wares, who kidnaps a well-to-do housewife in all white (and her little dog, too), then lugs her off in an ultra-chic trunk like it's NBD.

What happens next? You'll have to wait 'til Thursday, when the video drops in full.