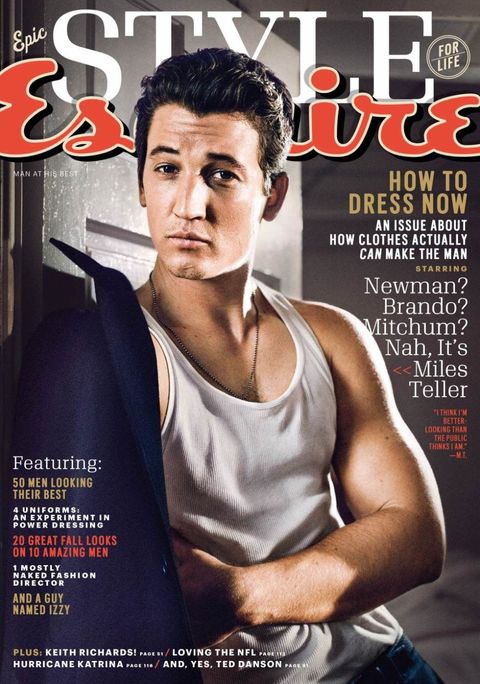 Miles Teller is not particularly happy with his most recent cover interview, which made the rounds online this week because it...how shall we say...doesn't paint him in the most flattering light.

"You're sitting across from Miles Teller at the Luminary restaurant in Atlanta and trying to figure out if he's a dick," the profile begins.

"So yeah," it continues several paragraphs later, "he is kind of a dick."

What did Teller think? Well, hours after the story went live on Esquire.com Wednesday, he tweeted this:

@esquire couldn't be more wrong. I don't think there's anything cool or entertaining about being a dick or an asshole. Very misrepresenting

His co-stars from the upcoming Fantastic Four reboot also came to his defense.

My movie husband @Miles_Teller is crazy talented and a truly fantastic person.@esquire

Of course, the profile, by Esquire's Anna Peele, doesn't just call him a dick. It also delves into his career (including the absurdly small amount of money he's made on indie films), his painful car accident (and the emotional fallout), and how much he claims to not give a shit.

Oh, and it also discusses the supposed shape of his penis.

Here are seven highlights, some dick-ish, some not at all.

1. He compared his penis to a highball glass. And told the waitress at the restaurant where the interview took place about it.

2. He showed Peele a picture of his back muscles. The reason, according to Peele, was to "prove how strong he is."

3. He says he earned just $8,000 for Whiplash, which garnered a Best Picture nomination and Best Supporting Actor award for Teller's co-star J.K. Simmons. He also claimed to make just $5,000 for Rabbit Hole and $7,000 for The Spectacular Now.

4. He grapples with which types of movies to do. "It's hard to get to the right position, to be somebody who is commercially successful and critically acclaimed," he said. "That's the sweet spot."

5. He bragged about smoking a ton of weed in college. "Me and my buddies prided ourselves," he said. "We were like, 'Nobody smokes this much pot. I guarantee you can ask anyone in this dorm, man . . . we smoke a lot.'" Teller said he quit smoking pot when he got Hollywood.

6. He told an intense story about why he doesn't have any college friends. Teller got into a nasty car accident in college, leaving him with multiple scars on his face. To help pay for the mounting medical bills, his family sued the insurance company of the driver, who was Teller's friend. He recounted the fallout:

"He comes to me. He's like, 'Miles, I don't know if we can be friends when my parents' insurance premiums are going to go up.' I just sat with it for, like, twenty-four hours, and after that I was like, 'Man, fuck you. Like, I've never made you feel bad for this. For you to make me feel guilty and make me feel like you're the victim here, that's really fucked up.'"

That led to a rift between Teller and his then pals.

7. He claims to not give a shit. Here's what he had to say about a TMZ video of him dancing at a music festival:

"I don't give a shit. I can either censor myself or not, and you're always trying to figure it out. It's how you deal with the paparazzi. Do you not do what you would do? Do you live your life with all these filters and censors because everyone has a camera? Or do you fucking dance how you would dance and have people say, 'Oh, he's on drugs'? I was drinking and was at a fucking Brett Dennen fucking concert."

Read the entire story—it's worth it—over at Esquire.com.

Michael Sebastian Michael Sebastian was named editor-in-chief of Esquire in June 2019 where he oversees print and digital content, strategy and operations.
This content is created and maintained by a third party, and imported onto this page to help users provide their email addresses. You may be able to find more information about this and similar content at piano.io
Advertisement - Continue Reading Below
More From Celebrity
Beyoncé Stuns in a Mesh Dress With Matching Gloves
Lizzo and Chris Evans Had the Best IG Interaction
Advertisement - Continue Reading Below
Travis Shared PDA-Heavy Bday Tribute to Kourtney
How the Queen Ends Awkwardly-Long Handshakes
The Queen Has a Rule Against Bad Talking Family
The Queen Took a Pic of Philip With Her to Funeral
The Queen's Tolerance Was the Key to Her Marriage
J.Lo "Likes" Shady IG Post After A-Rod Split 👀
Beyoncé Shares Photos of Her White Power Suit
Will & Kate Welcomed Harry Back Into Their Group