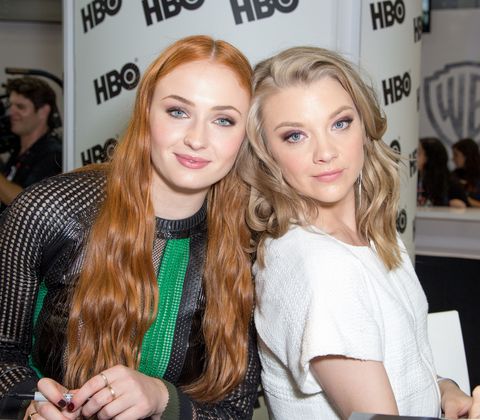 Expert Game of Thrones schemer Natalie Dormer is taking on a new role, though in a similarly woman-staking-her-claim-in-the-world kind of vein. In BBC Two drama the Scandalous Lady W, she plays famed feminist icon Seymour Dorothy Fleming, who dared separate from her husband in 18th century England.

So how does the star feel about feminism in the ol' 2015? "It upsets me that it has to be seen in such rudimentary 'We're better than you, you're better than us' terms," she told Digital Spy. "It shouldn't be about man or woman. Surely as a modern society, what we're aiming for is just equality across the board?"

And no, feminism does not = girl power. "Feminism—that word is so misconstrued by so many people, especially young people, which disturbs me," she continues. "It's not about 'girl power,' whatever that means! It's just about equality between the sexes and everybody being able to live as they wish."

Jessica Pels Editor-in-Chief As the editor of Cosmopolitan, Jess oversees the editorial for all of Cosmo's efforts across print, digital, video, and emerging platforms.
Advertisement - Continue Reading Below
More From Celebrity
36 Celebrity Couples Who Love Some PDA
Ben Affleck Is Blond Now
Advertisement - Continue Reading Below
A Timeline of Charles and Diana's Relationship
Kendall Jenner Wants to Work for Beyoncé
Harry & Jon Bon Jovi Sing Together at Royal Event
Khloé Kardashian Is Being Trolled Over Febreze
A 'Friends' Reunion Special Is Coming to HBO Max
Katie Holmes Is in Head-to-Toe Chloé at Their Show
Ariel Winter Now Has Strawberry Blonde Hair
46 Stars Who Dated Before They Were Famous