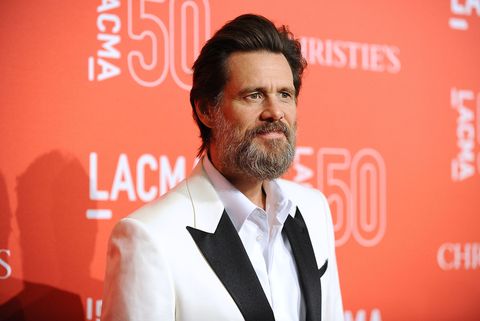 Following girlfriend Cathriona White's reported suicide on Monday night, Jim Carrey has said that he is "shocked and deeply saddened" by the news.

"She was a truly kind and delicate Irish flower, too sensitive for this soil, to whom loving and being loved was all that sparkled," he said of "sweet Cathriona" in a statement Tuesday. "My heart goes out to her family and friends and to everyone who loved and cared about her. We have all been hit with a lightning bolt."

Carrey began dating White in 2012, but the relationship only lasted a few months. They reconnected in May of this year, reportedly splitting again before her suicide.

White's cause of death has not yet been determined, though Los Angeles Assistant Chief Coroner Ed Winter told People magazine that there were signs of suicide.

"It was reported as a possible suicide," he said. "There evidently was a note found. There were pills located near her."

According to CDC data from 2013, suicide was the second-leading cause of death in the U.S. for 15- to 34-year-olds.  If you or someone you know is at risk for suicide, contact the American Foundation for Suicide Prevention hotline at 1-800-273-TALK.

Michael Sebastian Michael Sebastian was named editor-in-chief of Esquire in June 2019 where he oversees print and digital content, strategy and operations.
This content is created and maintained by a third party, and imported onto this page to help users provide their email addresses. You may be able to find more information about this and similar content at piano.io
Advertisement - Continue Reading Below
More From Celebrity
Every Detail We Know About J.Lo & A-Rod's Wedding
Bella Hadid Poses in a Slinky Sequinned Skirt
Advertisement - Continue Reading Below
Andra Day Stuns in a Gray Chanel Couture Gown
Emma Corrin Thanks Princess Diana at the Globes
The Sussexes Have Made a Huge Change to Archewell
Best Reactions to Jason Sudeikis' Globes Speech
Kaley Cuoco Wore a Princess Dress to Globes
Your First Look at Harry & Meghan's Oprah Special
Best Celebrity Instas from the 2021 Golden Globes
J.Lo Looks Impossibly Stunning In a White Swimsuit